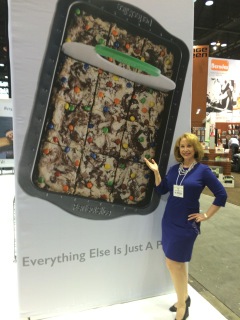 New patented baking pans developed by Ann Arbor-based entrepreneur Becky Parr features grid marks around the edges and a custom slicer to quickly cut uniform shapes and equal portions. The new product, called Perfect Slice Bakeware, has been so successful that it will be available in more than 60 countries this fall.

“Seven years after I came up with the idea, I partnered with BergHOFF International, and I went from housewife to international entrepreneur within a year,” says Parr, who notes it took her five years to acquire the first patent, which happened in May 2013. She now has seven patents on three continents.

After Parr secured her first patent, she says she submitted her idea to various companies and heard back from Craig Weinand, vice president of sales at Americraft Cookware in West Bend, Wis. Weinand ultimately became Parr’s business partner and introduced her to BergHOFF International, a designer, developer, and manufacturer of kitchen and cookware, with 2,400 stores in Europe.

“We had just five prototype pans in Germany, and by the time we got to Chicago, BergHoff had all five pans in six different colors. They had packaging and billboards — it was such an amazing transition,” Parr says.

Parr says she’s currently in negotiations with several companies and counts QVC Germany among her clients. In the meantime, she’s already applied for several other patents. “This is just the beginning,” she says.