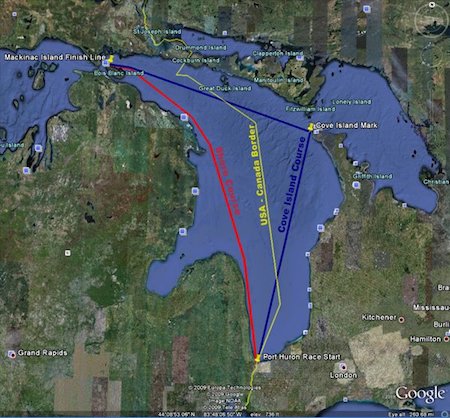 Detroit-based Bayview Yacht Club has announced the kickoff of this year’s Bell’s Beer Bayview Mackinac Race, which begins July 22 on Lake Huron just north of the Blue Water Bridge. One major change to the 93rd annual event will be the rating system used to handicap boats on the Shore Course.

Last year, Mackinac Race Authority adopted the Offshore Racing Rule for the Cove Island Course, and this year the Shore Course racers will utilize the ORR-EZ rules. The new rating system is designed to deliver more competitive racing and employs standardized hull data from measured boats it keeps in a database. ORR-EZ finds a boat of the same design and makes changes based on sail inventory, sail size, and how much crew a boat will carry to determine its handicap.

“We are excited for the kick off of the 2017 Bell’s Beer Bayview Mackinac Race. Preparations are well under way for this year’s event, the race committee has been working diligently for months and the sailors have been on the water for several months now, says Tricia Smotherman, the Bell’s Beer Bayview Mackinac Race chair. “We believe this will provide a more equitable rating and in the long run will bring us in line with other races.”

From its traditional start in southern Lake Huron, the fleet will head north on one of two courses. The shorter Shore Course covers 204 nautical miles along the Michigan shoreline heading west to the Mackinac finish line, while the longer Cover Island Course is 259 nautical miles and takes sailors around a buoy off the tip of the Bruce Peninsula in Canadian Waters before heading west towards the finish line of Windermere Point on Mackinac Island.

Approximately 2,500 sailors will take part in the race, with an estimated 75,000 sailing fans, families, and partygoers attending festivities in Port Huron leading into the Saturday start.

More information about the races and tracking for individual boats during the race can be found here.