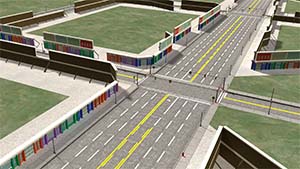 Gov. Rick Snyder, along with business and government groups, are working to develop a 335-acre test facility for autonomous and connected vehicles, called The American Center for Mobility, at the former B-24 manufacturing plant at Willow Run in Ypsilanti Township.

“Several years ago, we identified a number of assets that the state of Michigan had that we thought could really could be leveraged to drive economic growth and one of those was the transformation of the auto industry to becoming a mobility one,” says Doug Rothwell, president and CEO of the Business Leaders for Michigan. “In particular, we felt one of the ways we could really solidify the base of that transformation was to ensure that most of the research, testing, and validation of those technologies occurred in Michigan rather than in other places.”

â€‹Rothwell says The American Center for Mobility, expected to be completed in the next two to three years, will include a three-level interchange, a high-speed loop, connected infrastructure, along with simulated urban and rural environments.

“Scale is really the biggest difference,” he says. “M City is terrific but it’s about 30 acres. (The American Center for Mobility is) much larger and it provides a lot more opportunity that you don’t have at M City.”

Rothwell says the project could cost up to $80 million. A developer has not yet been selected. He says a 501c3 will likely be set up, and a master developer and project manager will then be selected.