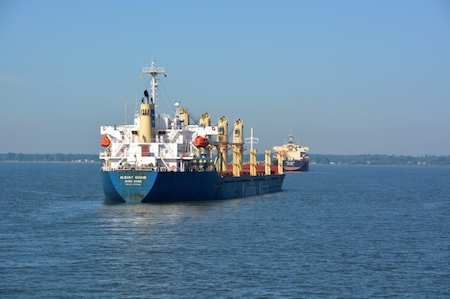 Nearly $7 billion in investments have been committed to updating and upgrading the infrastructure of the Great Lakes-St. Lawrence shipping system over the last five years, says a new survey from the American Great Lakes Ports Association and the Canadian Chamber of Marine Commerce.

Broken down, more than $4.7 billion has been invested in the navigation system from 2009 to 2013, and another $2.2 billion has been committed to improvements from 2014 to 2018. Private companies invested nearly 70 percent of the capital, with 33 percent coming from government funding.

Among the biggest investors are American, Canadian and international ship owners, who have committed more than $4 billion over the past five years on the biggest renewal of the Great Lakes fleets in 30 years. The vessels include everything from ferries and barges, to tugs and icebreakers.

In addition, about $2.9 billion has been, and is being invested, in port, terminal, and waterway infrastructure investments. About 4 percent of those investments are being made in Michigan and Detroit, where the Detroit Port Authority operates, the survey found.

The marine highway supports the activities of more than 100 ports and commercial docks located in each of the eight Great Lakes states, as well as the provinces of Ontario and Quebec, and facilitates about $35 billion in trade each year, while supporting 227,000 jobs in the U.S. and Canada, according to Stephen Brooks, president of the Chamber of Marine Commerce.

“The monies being spent reflect a commitment to the health and safety of the workforce as well as the environment,” Fisher says. “New technology and equipment will ensure that cargo moves efficiently, sustainably, and safely.”