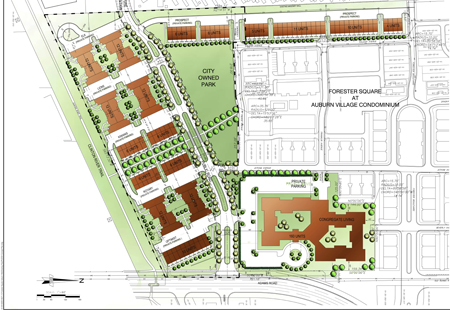 A recently approved, 308-unit residential development in Auburn Hills may contribute to the critical mass that’s developed in the city’s center, according to a local economist.

“Detroit has a bit more going for it with some big headwinds developing in the coming year,” says David Littman, an economic consultant. “This lends itself to flowing with the momentum and being able to capitalize on the growth.”

The Parkways, a project of The Moceri Companies, is to be developed on 22 acres of land west of Adams Road and north of the Clinton River Trail. It’s to consist of 76 townhouse units, 72 stacked flat units and a three-story, 160-unit congregate senior care complex situated along a new public boulevard. In addition to the residential living, the project includes more than two acres of open park space and a new boulevard. The new road will serve as the eastern gateway from Adams Road to downtown Auburn Hills, according to the developer. Once complete, The Parkways has a projected market value of $75 million.

Littman noted that Auburn Hills, population 21,000, already has a lot of desirable features in the city or nearby areas attractive to would-be homebuyers. These include: Chrysler Group LLC and automotive suppliers; Beaumont Hospital, Troy, and a new outpatient building; Great Lakes Crossing Outlets; and The Palace of Auburn Hills, and is situated in economically stable Oakland County. Coincidentally, Moceri is also headquartered in the city.

“When this land became available, we saw the potential to develop the area with multi-generational residential living options that add to the community’s appeal,” says Dominic Moceri of The Moceri Companies. “We believe strongly in downtown Auburn Hills and the positive direction of the city.”

The Parkways will be comprised of five phases, with the first slated to begin in spring 2014. Moceri intends to complete the project by the end of 2017.

A unique aspect of the project is that Moceri has pledged to make the development plug-in electric vehicle ready. It will be the first residential project of its size in the state to commit to prep its units with conduits and wiring for charging stations, along with upgraded electric panels in each unit. The project aligns with the city’s nationally recognized comprehensive Electric Vehicle Infrastructure Ordinance.

“By prepping these garages with proper wiring, new residents within this development will only need to add a charging station on the wall if they buy or lease an electric vehicle,” says Cohen. “It’s like adding a garage door opener and the costs are now very similar.”