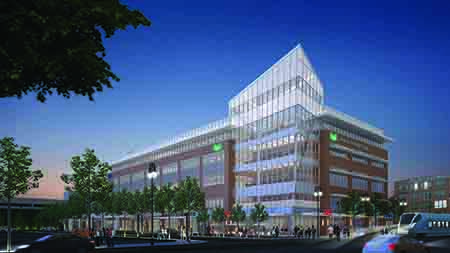 Midtown Project LLC will break ground today on a $68-million medical office building that will help centralize nearby providers of the Wayne State University Physician Group into one location. The five-story facility, set to open in 2016, will replace the Professional Plaza at 3750 Woodward Ave. in Detroit.

“There’s almost no comparison (between the new medical office building and Professional Plaza),” says Dr. Robert A. Frank, CEO of the WSU Physician Group, the principal tenant of the new building. “From the first sketch that was drawn, this building has been designed to be a medical facility. The whole notion here is about comfort for the patient, comfort for the family, and streamlining of the business.”

The facility — which will also include ground-level retail space and fast-casual dining options — will bring together up to 450 physicians currently practicing at the organization’s other Detroit-based clinics, Frank says. It is projected to accommodate more than 200,000 patient appointments annually for primary and specialty care, including internal medicine, ophthalmology, women’s health, neurosurgery, and various diagnostic services.

Frank points to the added convenience of a four-story parking structure, which will offer about 650 spaces for patients and workers on an adjacent lot along John R. The new medical building will be located near the Martin Luther King Jr. Boulevard station stop along the future M-1 RAIL streetcar line, which is expected to be operational by late 2016.

The new location is just one part of the organization’s plan to establish medical hubs — or one-stop shops — in its major markets, Frank says. “We already have a spot in Southfield (at Northwestern Highway and 12 Mile) that we’ve slowly been expanding. And we have a commitment to Dearborn as well.”

The nonprofit is also launching a clinical care unit today at 420 Stephenson Hwy. in Troy, which the group has owned for about six years. After moving in 240 administrative support professionals about two years ago, and opening a surgery center in 2013, the WSU Physician’s Group spent nearly eight months working on a 25,000-square-foot build-out.

“The whole idea is to completely control the patient experience — to have a place where doctors can interact and patients can enjoy the efficiencies of being in a single place (for multiple services and appointments),” Frank says.