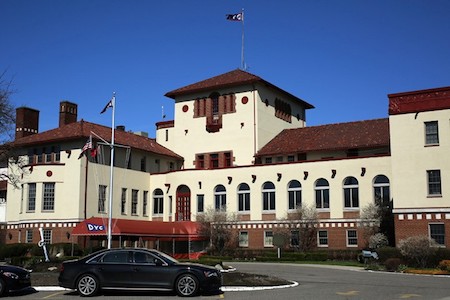 The Detroit Yacht Club Foundation is hosting its Fifth Anniversary Gala Fundraiser to continue the preservation and restoration of the clubhouse and other facilities on May 19. DBusiness Daily News interviewed Mark Lifter, president of the DYC Foundation, about its $100,000 fundraising goal and how the event proceeds will impact changes around the club.

1.DDN: What restoration work is taking place at the DYC this year?

ML: We’re kind of at the beginning of restorations because a lot of them need to be done in better weather, so we’re launching into several of these projects right now, and then we have some that are somewhat contingent on what we do at the gala in terms of fundraising. That’s why the gala becomes important every year. Our theme, since we began the foundation, has been to recognize that a lot of the physical deterioration of the now 94-year-old clubhouse comes from water intrusion. We take a weather beating every year here on Belle Isle, and we’ve had to address the roofs, both the flat and sloping tile roofs, and address masonry and make repairs, and replace windows and do some structural work, where we discover corrosion in support structures while doing some other projects. Then there are other things that come up along the way, like last year we updated the clubhouse to include an appropriate accessible entrance for those who need an easier access point into the club, so that was an important improvement that met today’s requirements, but in a historically accurate manner. This year, we’re focusing on what we call “seal the envelope” improvements, which are done to stop water intrusion, thinking of the building as an envelope. So that’s a lot of the roof, and brick, and stucco on the clubhouse, which is about 93,000 square feet, so there’s a lot to take care of. For example, we have a veranda on the river side of the clubhouse that’s been a source of leaks for a number of years, and we needed to do some major work to discover the source of that problem, which was kind of worse than we thought. We’re also doing some painting to protect some of the other surfaces, and replacing some windows, as well as doing some other research into some problematic areas to better understand the problems, and what’s going on there with water intrusion. We also have an indoor pool that goes back to the original building that was built in 1923 that has some issues going on, so we’re having an engineering assessment of that. So those are some of the things that we’re going to be doing this year, and with the success of the gala, we’re going to complete all of the stucco repair that we started four years ago, and the work on the veranda, which is important for guest events. Also depending on the success of the gala, we’re going to begin some work in our grand ballroom, refinishing some of the surfaces, including the doors, and potentially some repairs to the ceiling. There are some beams that have classic, decorative surfaces that we intend to repair in a historical fashion. So it’s really a blend of things people can see that make the club more presentable, and also things that are structural that we know we need to do.

2.DDN: Why is historical accuracy so important when undergoing these renovations?

ML: It’s important to preserve the historical look and feel of the club to the greatest extent possible, and there are guidelines that we try to adhere to for historical preservation, so we’re always very attentive to finishes, not replacing historical features with much more modern features. A good example is windows, we can replace older windows with more modern, energy efficient windows, but when we do that, we get replacements that maintain the look that the clubhouse has always had. So we have a long list of those things to do, and there are many more for future years, so this is a long term commitment to preserve this jewel of our building. Historical preservation is a fundamental premise that the foundation operates under.

3.DDN: Do you think these renovations will disrupt your summer experience at all?

ML: We try our best not to conflict with major events and avoid construction in primary activity areas. Just as an example, as we start our painting work this spring, we’re going to start before things get busy in the patio area because we tend to have more activity there, and then move on to areas of the club that are less busy where it won’t impact member and guest activity in a significant way. So it’s just a matter of planning and coordination.

4.DDN: What do you think it adds to the club experience?

ML: The change has been pretty remarkable over the four years that we’ve been working on everything, so it’s been five years of foundation activity, in terms of fundraising and spending money on restoration and preservation, that’s why we’re calling it the foundation’s fifth anniversary gala. So it’s guests and members that have been here before commenting on how great the club looks, and it has been quite a transformation from an appearance standpoint in most areas of the club. Not every area, though, there’s still work to do, and that’s part of what we’re doing this year and probably part of next year. It would be wonderful if we could raise all the money we need right away and do everything all at once, but that’s just not feasible, so we try to raise as much as we can, and we get a lot of support, but the work goes on. It’s also beneficial to the members to see that the club is vibrant and healthy, that we’re investing, and its consistent with that’s happening on Belle Isle. Since the state has taken over the management, there’s been quite a remarkable improvement in Belle Isle and some of the facilities, and we’re really part of that, and part of the whole resurgence of Detroit, especially downtown and the related areas. So it all sort of ties in and it’s a good feeling to be part of that. Even though we’re a private club, the Detroit Yacht Club is probably somewhat unique in terms of the amount of outside activity that we have, including weddings and gatherings of various kinds for the community. So having a better physical presence really helps that, and makes people more comfortable booking events.

5.DDN: What will the fundraising gala be like this year?

ML: This year at our gala, which usually attracts around 200-250 people, we’re having it in our grand ballroom, which is one of our most notable rooms in the clubhouse. I’ve been told it’s the largest remaining wooden floor ballroom left in the Detroit area. There used to be a lot of them, which kind of goes back to historical preservation. Detroit has unfortunately lost a lot of historical structures just due to a lack of effort to preserve them. We’re trying to make sure that doesn’t happen to our building. So the gala will be in our ballroom, with a cocktail hour, and then we have really an over-the-top, quite fabulous strolling dinner; our chefs and staff really go full bore to make this a great event. Each year I think they top themselves with the wonderful food and presentation, and it’s still casual. It’s a strolling dinner with carving stations and displays of the appetizers and desserts and such. While that’s going on, we’ll be holding our silent auction, so while people are strolling around and having dinner, they can browse around and bid on a number of silent auction items. When that is done, we move into our live auction, with some of the more high-end items offered up with a professional auctioneer, which is always really exciting to see. Between the silent and the live auctions, we have everything from gourmet dinners at the club, vacation stays all around the country, boat rides, a Corvette for a week, spa packages, auto detailing certificates, artwork, personal training sessions, sporting tickets, and more. So there’s a wide range of things, and the auction culminates the evening.

Note: Tickets for the gala range from $125-$400 and can be purchased here or by calling (313) 757-5240. A private reception for benefactor ticket purchasers and event sponsors will be held at the DYC prior to the start of the gala.