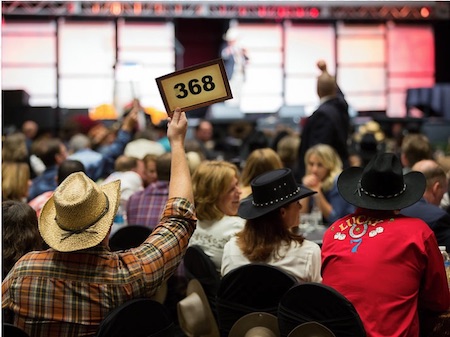 When Ken Hopkins attended the inaugural Cattle Barons Ball 15 years ago, he knew he had found what he’d been looking for, a meaningful way to help cancer survivors and be involved in his community. DBusiness Daily News spoke with Hopkins about what keeps him coming back to the annual Cattle Baron’s Ball and what guests can expect during this year’s event, which takes place Sept. 23 at Cobo Center.

The Cattle Baron’s Ball will be celebrating 15 years this year, so it’s a very successful program. I started off just attending the first year and really liked what it stood for, so I volunteered to be involved in the planning and sponsorship committees, where we solicit executives and their companies to support the program by attending, giving auction items, and buying sponsorships for the event. I did that for six or seven years and then I took the opportunity to lead the sponsorship committee for a few years before passing that torch to Larry Ott, who is now the chairman. I remain on the sponsorship committee and the executive committee, which oversees the whole program, and last year I was the executive chairperson for the event.

2. DDN: What keeps you coming back?

I’ve always wanted to contribute, but didn’t know what I could bring to society and the local area. This is a fun event, and after attending and hearing some of the stories and seeing people literally breaking down in tears as they saw the way the community had come together to support them, I decided to get more involved. Unfortunately, my wife’s parents have both battled cancer a couple times each, but fortunately due to the advancements in medicine and the way they combat that, they’re both still with us. My mom also was just recently diagnosed with cancer, but I’m happy to say that’s in remission as well. Cancer is still a very terrible thing, but with advancements in science and research we’ve been able to do, our survival rate is improving dramatically. So, it’s great to hear the stories of people who are still with us today that perhaps without the advancements of the American Cancer Society wouldn’t be.

3. DDN: Can you speak to the mission of the American Cancer Society?

When people hear the word “cancer,” it throws a monkey wrench in their life, so the American Cancer Society provides information, counseling, and basic things like transportation. The Detroit-area American Cancer Society was able to provide 23,000 rides to cancer treatments for people just in Macomb, Oakland, and Wayne Counties. That’s an amazing thing because people have other things they need to worry about other than how they’re going to get to treatment and get back. I’m not a doctor, I don’t know how to help people with the actual issues, so if I can help people around the issue and help generate funds that go to cancer research, it’s a great thing.

4. DDN: What can people expect from this year’s Cattle Baron’s Ball?

There’s always black ties and charity galas that you attend and everyone wears their tuxedoes and ball gowns, but this event has always been quite different. People put on their jeans and cowboy boots and a country shirt and go have some fun. That was kind of unique in the beginning, but it provided a great backdrop because we’ve always focused on the country theme, with performers, a mechanical bull, and the whole motif. It’s a tried and tested theme and everyone seems to have a great time.

This year’s gala is led by Joy Falotico, who is the chairman and CEO of Ford Motor Credit Co. Some of the fun things we’ll do are having performances by Annabelle Road, which is a Detroit-based country group and Levon, which is a national country group that is becoming more well known. Besides that, we’ve got a strolling dinner with food stations from 20 plus restaurants in the area, and a silent auction, and then we’re going to have time to celebrate 15 local stories of hope, survivorship, and research to put a personal face on where all the money we’re raising goes towards. We’ll also have a special live auction where we’ll be auctioning off several high-end items.

5. DDN: How much do you expect to raise and how will the proceeds be used?

Going into our 15th year, we’ve already raised more than $15 million, so of course we are hoping to raise in the ballpark of $1 million at our event. Of course, when the economy is good or bad, it always varies a little bit, but raising a million dollars in one night is our goal and makes it a very successful program. The money raised goes towards cancer research, patient services, advocacy, and education, so we always make a big push for people to get screened because the best way to beat cancer is to catch it early.

More information about the Cattle Baron’s Ball can be found here.