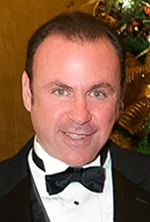 DBusiness Daily News interviewed Patrick Rugiero, executive director of Roman Village Restaurant Group and chair of the National Kidney Foundation of Michigan’s 11th annual Kidney Ball to be held Saturday evening at the MotorCity Casino Hotel in Detroit, about the importance of raising awareness for kidney disease and what programs the event supports.

1. DDN: How did you get involved with the National Kidney Foundation of Michigan?

A childhood friend of mine asked me to get involved because one of our mutual friend’s young daughter has kidney disease. I got involved just to help out with some donation items, auction items, and sponsorships. Last year, I was asked if I would co-chair the auction committee for the Kidney Ball, which brought in close to $150,000 — just between the silent and the live auction. I was also asked if I would be on the board of the National Kidney Foundation and chair this year’s event. I’ve been working throughout the year to mobilize our executive committee, which is a phenomenal group of people who are very committed to the cause of bringing in donations and sponsorships and making things happen for this year’s Kidney Ball.

2. DDN: Why is the work of the National Kidney Foundation important?

It brings a great deal of awareness to kidney disease, which affects a lot of people in this country and more than 900,000 people in Michigan. The National Kidney Foundation of Michigan has a lot of educational programs about preventing kidney disease. Studies show that 70 percent of kidney disease is preventable. There are skyrocketing and epidemic rates of obesity, diabetes, and heart disease in this country, which are all interlinked. The kidneys are the first line of defense to purify our system. We’ve got a real serious kidney issue — a lot of people either have, or will have, kidney disease in their lifetime.

3. DDN: How is the money raised for the event used?

The Kidney Foundation of Michigan in Ann Arbor has many community programs and services that can help prevent kidney disease, and the money raised at the event will support those much-need causes. The foundation hosts walks throughout the year to promote good health and good eating habits for children. The National Kidney Foundation of Michigan hopes to raise $550,000 at the ball.

It’s been labeled as one of the most fun black tie events in the country. We wanted to have a venue that was home based here in Detroit. We wanted to be a part of Detroit’s rebirth and rejuvenation and all the great things that are happening. This year is the first year that we’re going to be at the MotorCity Casino and Hotel. The executive chef at MotorCity Casino, Scott Stromer, is a kidney transplant recipient.

The National Kidney Foundation of Michigan has a phenomenal track record. With many charities, so much of the donations go towards administrative costs. We’re just the opposite. We’ve got more than 90 percent of the funds raised going toward the programs. The quality of the charity is top notch, and that’s why we’re constantly leading the indicators. The National Kidney Foundation of Michigan was ranked the No. 1 charity in the category of diseases, disorders, and disciplines in 2014 by Charity Navigator, a charity evaluator. In 2015, it earned its eighth consecutive 4-star rating from Charity Navigator for sound fiscal management and commitment to accountability and transparency.

5. DDN: Why should people attend the Kidney Ball?

It’s good for the community. Everybody is touched by kidney disease and it affects every age group. There are about 14,000 people on dialysis today in Michigan. Kidney disease can be preventable if you understand it and take some steps to modify your lifestyle and your diet. By coming, you immerse yourself in what’s going on and understand more of the programs that are available. Plus, as might imagine, there are some amazing auction items.

To purchase tickets to the 2015 Kidney Ball, click here.