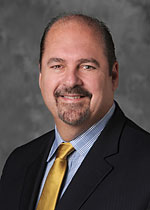 Bob Riney, executive vice president and COO of the Henry Ford Health System, and is the 2015 chair of the American Heart Association’s annual Metropolitan Detroit Heart Ball, to be held this year on June 5 at Eastern Market Shed 3 in Detroit. The annual event raises money for cardiovascular research in southeastern Michigan. DBusiness Daily News spoke with Riney about his involvement with the American Heart Association and how the event impacts the region.

1. How did you get involved with the American Heart Association?

The American Heart Association has a long-standing history of returning 100 percent of every dollar raised (back to the) market for purposes of research and for support of programs in cardiovascular disease. I’ve been able to see firsthand how the research division of our cardiovascular program at Henry Ford Health System has been able to benefit from the American Heart Association. I really like the fact that it’s not just focused on research and it stays local. They really believe in investing back in the community that raises the money.

2. Why is the work of the American Heart Association important?

There are a lot of health challenges that we face in the entire country, but it’s hard to find a single family that hasn’t had someone that’s been impacted by cardiovascular disease. The research had led to very significant changes where you can actually see the results. If you think back 20 years ago, the majority of advanced cardiac problems were going to require open-heart surgery. That’s a very significant trauma to the body. Fast forward just 20 years and open heart surgery volumes decline every single year in this country because research has allowed for less invasive discoveries. There are all these advancements that have really made a difference in peoples’ lives. The education around what individuals can do to manage their own care has been advanced, too. Also, my father died of cardiovascular disease. I’m no different than any other family. Had he had the advancements that are present today when he was going through his journey, I think he might have had a much different outcome.

The first thing I wanted to do when my wife and I agreed to be the chairs of the Heart Ball is create a fun event. This is a very event-heavy town and we all get asked and are privileged to be able to go to a lot of events for great causes, but there can be a sameness that develops. The flow of the evening is intended to be high energy and short on speeches. The event is summer chic because what my wife and I really wanted is to get people out of the tux and into something that they can show off a little bit of their personality and not be confined to what that means. We’re trying to have auction items that are going to be very unique to people and not something they could choose to go buy at a store if they wanted to. The other thing that we’re adding, in partnership with the American Heart Association’s Young Professional Board, is Pulse Party Detroit. It’s really designed to bring a lot of young professionals who are just getting into the philanthropy mode and introduce them to these types of events. The ticket is not nearly as expensive as it would be for the full event, and there will be outdoor dancing and a concert. This hopefully will reintroduce even more people to what’s going on in the city.

4. Why did you decide on Eastern Market?

I wanted it in the city. My thinking was that while we’re raising money to repair hearts, we’re also helping to repair the heart of the city. The connection between all of our collective efforts is to get the heart of our city working better by everything that we invest in the city, with an event that’s actually going to raise money for improving the heart health of individuals. I think Eastern Market represents, in many ways, the picture of what we hope for the future of our region because if you ever just stand at Eastern Market on a Saturday, it’s the epitome of what I think we all think of when we think of diversity. Every ethnic (group,) every age, every type of human being you can think of every socioeconomic status converges on that market. So to me, it’s a very symbolic thing of what we want.

5. Why should people go and support this event?

It’s going to be fun. It’s not going to be stuffy so you’re going to support a great cause but you’re going to walk away feeling like you attended a really fun party. Also, the advancements going on in cardiovascular medicine right now are really enhancing the quality of one’s life and keeping people from having to go through much more complex life treatment procedures like they had to in the past and that’s a really, really good thing for us all to remember. The other thing, on the education side, is that we’re seeing early signs of cardiovascular disease in younger people than ever before and part of it’s related to the obesity rates in young people and so the education component to reverse that trend is so important.

To purchase tickets to the 2015 Heart Ball on June 5, visit DetroitHeartBall.org/.