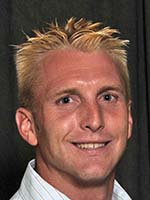 As Detroit’s comeback continues to garner national and international attention, Eric Kracht, the new president of the Adcraft Club of Detroit and vice president of sales at Fox Networks, spoke with DBusiness Daily News about his plans for the club and where he sees the advertising industry headed.

1. DDN: What is it like being president of Adcraft Club of Detroit?

We have access to a lot of the great marketing and advertising minds around the city of Detroit, so it’s really fun to be able to talk with them to see what their goals are and see firsthand some of the great things coming out of the city.

2. DDN: What are your goals for the organization over the next year?

3. DDN: How do you plan to help keep Detroit’s marketing and advertising industry at the forefront of the industry?

By bringing the best possible speakers to Detroit to make sure that our community is staying educated on the newest and emerging trends in the advertising industry. We just had a really good program with Tom Wilson, (president and CEO of Olympia Entertainment), where he was talking about the new Detroit Events Center (new arena for the Detroit Red Wings and neighboring development at the northwest corner of I-75 and Woodward). It was really great because we got a look at everything that was going to be happening in that new area that’s going to connect Midtown and downtown Detroit.

4. DDN: What changes have you noticed in the marketing and advertising industry?

The biggest changes we’ve seen is what we’ve seen everywhere in the country, which is just all the new and emerging technology that have really taken the industry over. It makes it a real fun and exciting time to be in the advertising industry. Detroit’s known as an automotive town, but we have several other advertisers, too. What that means is when you’re dealing with these big advertisers; you have to be at the forefront of the newest and the best technology that’s out there. The industry has been changing rapidly, and in the city of Detroit, we as much as everybody else, have had to really adapt and embrace all these new changes that are happening.

5. DDN: What do you like most about leading the Adcraft Club of Detroit?

One of the best parts of the Adcraft Club is we bring together the Detroit advertising and marketing community, which is one of the few markets that houses every major media company. We have access to, and have companies here, such as Snapchat, Facebook, Google, Twitter, and Time Inc. The list goes on and on — you name it and they’re in Detroit. That’s one of the best parts of being the president of this club. We bring together so many great companies, and the Detroit advertising community is so big and so vibrant.

On Wednesday, the Adcraft Club of Detroit will hold its ninth annual D Show at the Masonic Temple in Detroit, bringing together more than 1,000 members of the community to award some of the best advertising and marketing work coming out of the city. To purchase tickets to the event, click here.