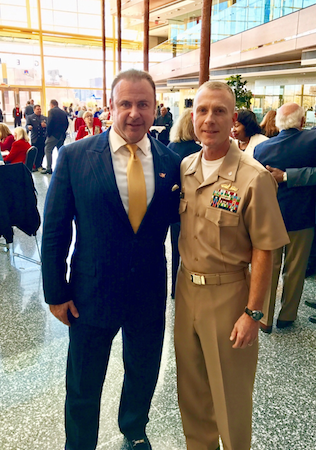 Patrick Rugiero is a member of the USS Detroit Commissioning Committee, a nonprofit organization that was established to host a series of events and activities surrounding the arrival last Friday of the U.S. Navy’s newest Freedom-Class Littoral Combat Ship. Given the exact arrival of the ship was only made known a few weeks before it docked at General Motors Co.’s world headquarters at the Renaissance Center, the committee had to start up fundraising with little advance notice. Rugiero, co-owner of Roman Village in Dearborn and Antonio’s Cucina Italiana restaurants in Dearborn Heights, Canton Township, and Farmington Hills (along with his mother, Rita, and three brothers, Antonio, Marco, and Robert), spoke with DBusiness Daily News about the challenge of raising close to $400,000 in sponsorships in a compressed time frame.

1. DDN: How long has the committee been working on the commissioning activities?

Our committee has been working on it for a few years. I got involved earlier this year when I was approached by committee members Janina Jacobs and John R. Peracchio, who is our chairman. One of my main responsibilities was to assist in the fundraising effort to raise the money for all of the ceremonies and the events surrounding the actual commissioning. The U.S. Navy cannot raise money itself, so we worked very closely with the Navy League of the United States, Metropolitan Detroit Council, of which I am a member. And I would add the Navy League works in conjunction with the U.S. Navy, but it is the council that actually oversees the commissioning and the numerous events leading up to the official commissioning on Saturday morning.

2. DDN: How did you and the committee raise the funds so quickly?

We have raised almost $400,000 to date with sponsorships, which are continuing to come in. We still have some events to go, including the Chairman’s Reception at the GM RenCen Wintergarden tonight, which will be a nice dinner and reception where we will thank the 400 invited guests, which includes all of the sponsors. I can’t list all of them, but our sponsors included Quicken Loans Inc., General Motors Co., Penske Corp., Masco Corp., Bank of America, Plante Moran, Shinola, Comerica Bank, DTE Energy Foundation, Fifth Third Bank, Talmer Bank, Clark Hill, Meijer, Honigman Miller, Lear Corp., JPMorgan Chase & Co., Roman Village, and quite a bit more. Corporate events are very important because they allow our city, region, and state to produce events like this that create a positive image here that the rest of the country can enjoy and be proud of.

3. DDN: What other events are left to go?

We have the Platform Briefing Breakfast on the Detroit Princess tomorrow morning, where we will have 400 invited guests. From there, Gov. Snyder, Mayor Duggan, and a host of dignitaries and civic and business leaders will be escorted to the official commissioning on the plaza of the RenCen, which begins at 11 a.m. There will be around 4,000 people there, and it is an invite-only reception that is completely booked.

There were more than 1,000 people (on Wednesday) that wanted to visit the ship. Because everyone could not be accommodated given the logistics, USS Detroit Commander Michael Desmond went out onto the street and thanked everyone who was waiting in line. It was amazing. Here you have a captain of the USS Detroit on Atwater Street thanking everyone for coming. Everyone who came was told they may not be able to tour the ship, and yet everyone waited politely in line. We also had the Captain’s Dinner (Wednesday) night at the Port Authority, and Roman Village hosted a U.S. military veteran’s reception on Tuesday at Atwater Brewery (in Detroit). We had more than 450 veterans attend along with their families, and most of them were able to tour the ship. We supplied pizzas and Mama Rita (Rugiero’s mother) made more than 400 cannoli. We also hosted a dinner last Friday at Roman Village for the crew. The crew was also able to attend the Detroit Red Wing’s home opener (on Monday at Joe Louis Arena) thanks to the kind contribution of a dozen tickets on behalf of the Ilitch family. The captain even was able to escort out onto the ice Karen Newman for her rendition of the national anthem.

5. DDN: How did you raise the funds so quickly?

Everyone on the committee reached out to the companies they know who are good corporate citizens to support this event. I was the finance committee co-chair with Danny Sampson of the Sterling Group (in Detroit), but it was a team effort. It was challenging because the ship commissioning date was pushed back, and when the actual arrival was set it was a matter of contacting the sponsors in a short amount of time. We all had our fundraising spreadsheets and we rolled up our sleeves and visited with potential sponsors or reached them by phone. And the sponsorships are still coming in. I also wanted to thank our Honorary Chairman Jay Farner, who is president and CMO of Quicken Loans. In addition, I wanted to thank the city of Windsor; Essex County, Ontario; and Canada, as we worked together to bring the ship to Windsor next week before it goes on to Jacksonville (Fla.) where it will have its home base. We want to thank the Border Patrol and the U.S. government, as well. It was an honor and a privilege to be a part of this once-in-a-lifetime event for our city, state, and country.