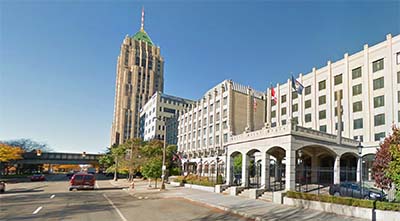 A ribbon-cutting ceremony was held today for the Regis Houze, a $4 million development in Detroit’s New Center that includes affordable housing and retail space.

“We’re excited to bring much-needed residential housing to New Center and to be a part of the revival of Detroit,” said Dave Ebner, principal of Barbat Holdings, the West Bloomfield-based developer of the project.

Ebner says the six-story building, connected to the St. Regis Hotel on West Grand Boulevard near Woodward Avenue, was constructed in 1966 and has been vacant for several years. He says the building has 58 apartments, including 48 one-bedroom units ranging from 525 to 600 square feet, and eight studio units ranging from 310 to nearly 370 square feet. There are also two units that offer two-bedrooms, which each offer 870 square feet of space.

“It’s exciting to see this project near completion,” says Laura Trudeau, managing director of The Kresge Foundation’s Detroit Program, an investor in the $30-million Woodward Corridor Investment Fund, managed by Capital Impact Partners, along with the Calvert Foundation, The Kresge Foundation, Living Cities, the Max M. & Marjory S. Fisher Foundation, MetLife, PNC, and Prudential. “Our investment in the Woodward Corridor Investment Fund was a unique one for the foundation, particularly in terms of the length of the commitment. But we knew it would jumpstart this kind of investment in Detroit, which is so needed.” 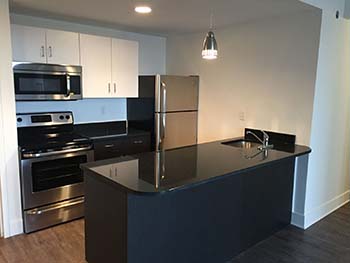 The Woodward Corridor Investment Fund offers long-term, competitive fixed rate loans for building and renovation of multi-family and mixed-use properties. Trudeau says the goal of the fund is to establish a sustainable corridor model and expand economic opportunity for Detroit residents. The project, in which Midtown Detroit Inc. helped to develop, is located near a future M-1 rail station. The light rail system is expected to open for service in early 2017.

Construction on the project created nearly 150 temporary jobs, and 17 permanent jobs are expected to be filled through the retail space.â€‹ Residents are expected to move in before the end of the year.