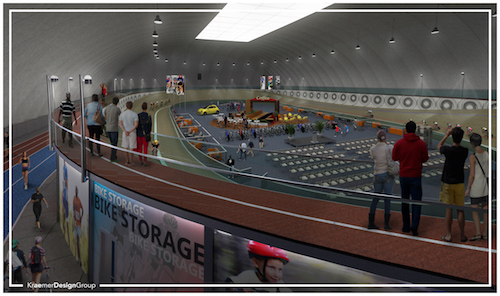 The Detroit Fitness Foundation announced it will fund a $4 million multi-sport complex featuring a world-class cycling velodrome as part of planned improvements to Tolan Playfield, located at the northwest corner of I-75 and Mack Avenue, and next to the Detroit Medical Center.

The complex, set to start construction in the spring and open by the fall, will feature three main components or “fields of play,” a world-class velodrome cycling track, running, walking and in-line skating lanes, and a multi-purpose infield along with a coffee shop/cafe. Once open, the complex will provide free access and programs including coaching and equipment for youth and seniors in the community. All other participation fees will align with the Northwest Activity Center.

“Last year, we unveiled the city’s plan for investing in our parks and neighborhoods and this project is a perfect complement to our efforts,” says Mayor Mike Duggan. “Having safe and healthy spaces within our neighborhoods for families to live and play is essential to our city’s continued growth. The Detroit Fitness Foundation initiative will be a great asset to our community and its residents.”

The complex will be an air dome structure designed and built under the leadership of Dale Hughes, DFF’s executive director, who has designed and built more than 20 velodromes worldwide, including the facilities used for the 1996 Olympic Games in Atlanta and 2015 Pan Am Games in Toronto. Detroit’s facility will be the second permanent indoor cycling velodrome in the U.S.

In addition to the indoor complex, DFF is donating $125,000 for additional outdoor improvements to the park and the city has committed $250,000 for new outdoor features including playground equipment, a picnic shelter and tables, fitness stations, a skateboard ramp, and horseshoe pits.