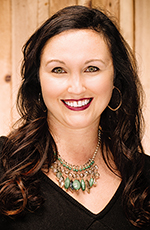 Valerie Richards, a former corporate communications specialist who today is a self-taught expert in logistics, helps oversee hundreds of moving parts. Six years ago, Richards joined The Parade Co. in Detroit, which hosts several annual events including America’s Thanksgiving Day Parade, the Ford Fireworks, the VIP Rooftop Party, and the Hob Nobble Gobble, along with 5K runs and numerous public tours. “What you find early on is that your organizational skills will carry you through, but you have to be willing to adapt on a moment’s notice,”  Richards says. Among numerous duties, Richards helped take the organization’s collection of papier-mâché heads, some of which date to the 1940s, from a few dozen traditional parade-ready characters to a force of nearly 300. With the assistance of Sean Moran, senior vice president of The Moran Group at Morgan Stanley in Grosse Pointe Farms, among others, the Big Heads Corps was formed five years ago. Tony Michaels, president and CEO of The Parade Co., says Richards has helped take the organization to another level. “We have so many great people involved in this organization, and it’s people like Valerie that make us go,” Michaels says.— R.J. King