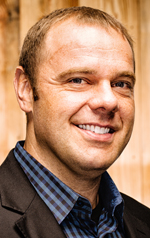 Not one to quit his day job, Tony Grant invested in a burgeoning brewing business in 2008 while working full time doing mergers and acquisitions work at Owens Corning. But when Northern United Brewing Co. in Dexter took off — it’s on pace to produce 10,000 barrels this year, up from 5,200 barrels in 2012 — Grant made a leap of faith. “The craft beer industry is on fire, and with the company’s other divisions, I stepped in as CFO and COO without too much of a learning curve,” he says. In addition to producing a range of beers under such labels as Jolly Pumpkin, North Peak, and Grizzly Peak, Northern United also operates Civilized Spirits and Bonafide Wines. “We have two production centers in Traverse City that produce cider and spirits, as well as a small brewing system,” Grant says. “We have a lot of moving parts, and the only way you can manage it all is to be incredibly organized.” On the restaurant front, the company operates Jolly Pumpkin locations in Ann Arbor and Traverse City, North Peak Brewpub in Traverse City, and Grizzly Peak Brewpub in Ann Arbor. “We have the capacity (in Dexter) to reach 12,500 barrels, and we plan to get there next year,” Grant says. “One thing we found to be successful was sharing our culture. You have to make sure all of your employees are on the same page, because they are greeting and serving our customers every day. If that goes well, everything else goes well.” — R.J. King