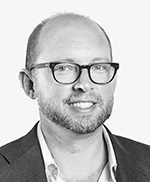 Entering his senior year at Mount Clemens High School, Shane Gianino was looking forward to the upcoming basketball season. A dominant power forward/center, he was hoping his skills would land him a four-year college scholarship.

“I was poised for a great year, and I had passed a physical, but something was wrong,” Gianino says. “They ran some blood tests and it turned out I had a tumor that was cancerous.”

The tumor was removed, and although he tried to play basketball while undergoing chemotherapy, school officials declared him ineligible to play. Raised by his grandparents in Clinton Township — his parents were pursuing their own careers — Gianino enrolled at Macomb Community College and tried to play basketball, but it didn’t work out.

Prior to graduation, in 2001, he left college and co-founded a technology company which developed custom lists that businesses and organizations could use to implement direct mail and email sales campaigns. In 2005, he left the entrepreneurial world to work in IT for some of his former clients. Four years ago, seeing a need to provide companies with specialized IT recruiting services and business intelligence solutions, Gianino launched Qstride Inc. in Troy (the company recently relocated to One Woodward in downtown Detroit).

“I’m married with two children, and I decided the timing was right to launch a new business,” he says. “We help companies better leverage their data to increase profits and sales.”

“When I started Qstride, I was at a point in my life where I was getting close to being 35 years old, and I didn’t want the opportunity to launch another company go by,” Gianino says.