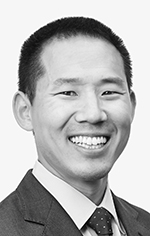 Growing up in a working class family in northern New Jersey, Scottie Lee knew he wanted to someday work in the retail industry. To prepare, he earned a Bachelor of Science degree in industrial engineering and economics from Northwestern University. From there, he worked two years at Vantage Point Consultants, followed by another two years at FTI Consulting, both in the greater Chicago area. Then destiny stepped in.

One of FTI’s clients was Taubman Centers Inc. in Bloomfield Hills, which owns and operates 21 luxury shopping malls. When his boss took a job at Taubman in 2007, he offered Lee a position.

“If there was a chance to ever work in the retail industry, I knew this was it,” Lee says.

At first, Lee kept senior management abreast of daily financial and retail market conditions, while earning an MBA in strategy and finance at the Stephen M. Ross School of Business at the University of Michigan in Ann Arbor. Today, as vice president of strategy and research, he oversees external growth opportunities while managing relationships with department stores.

Since 2012, Taubman has opened up malls in Salt Lake City; greater St. Louis; Sarasota, Fla.; and San Juan, Puerto Rico. Lee says one of the projects he’s most proud of is one that’s close to home — the rebranding of Great Lakes Crossing in Auburn Hills in 2010. When the mall struggled during the economic downtown, Lee worked to rebrand and market the property as Great Lakes Crossing Outlets. He’s also assisting with Taubman’s Asian projects — the company is opening three malls next year, two in China and one in South Korea. Moving forward, Lee says the retail industry is at an interesting turning point, with the maturation of online retail.