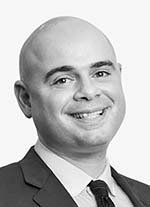 Richard Haddad concedes he wears a variety of hats on an average day as vice president and general counsel at Palace Sports and Entertainment and the Detroit Pistons.

“At a very high level, my job and my role here is to accelerate every aspect of our business,” he says. “There’s a risk management and risk mitigation aspect of my job. I have to protect our backside and downside, and try to minimize any exposure that we have.”

Take the three-year, $50-million renovation and transformation of The Palace of Auburn Hills, in which virtually every corner of the arena was upgraded — from concourses and gathering areas to restaurants, suites, and the Pistons locker room.

Haddad played a major role in all facets of the project, even down to the fine details of installing the $15-million, high-definition “Palace360” scoreboard system.

“I think the scoreboard was probably the single biggest challenge because there were so many moving parts,” he says of the project, which debuted last season. “That goes back to my role to kind of integrate and to connect the dots between those moving parts. “The cool thing about sports, for me, is it really has this amazing power to inspire and unite the community and to bring people together,” he says. “We try to make that happen with everything we do here at The Palace.”

Haddad readily agrees he landed his dream job, with one exception. “Unfortunately, and much to my chagrin, the basketball guys aren’t asking me for advice on who to trade for or who to sign as a free agent,” he says with a laugh.