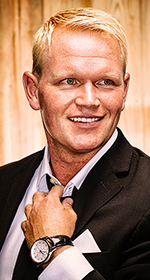 If you believe Michael Pearson, the British are coming — again. This time though it’s in the business of luxury watches — Bremont, to be exact. Pearson, director of North America operations, says he is driven to sell more of the high-end timepieces in the U.S. than are sold in Britain, where they are manufactured and assembled. A native Brit, Pearson has lived and worked in Michigan nearly seven years. His first job here was with a jeweler in Birmingham, where he led the company’s international business development. Pearson then met Bremont co-founders Nick and Giles English through a friend, and was offered a sales job on the spot. In just over a year, Pearson expanded the company’s operations from eight stores to 50. He quickly became director of sales in North America and has increased distribution to Canada and the Caribbean. Pearson points out that each timepiece undergoes extreme testing, and the movements are all mechanical, not battery-driven. Pearson says it is his personal mission to brand Bremont as a top-seller in this country. “It’s been wonderful to know that this company, this seed, is set and can grow into something quite special and unique in the watch industry across the world — but, more importantly for me, in the United States.” —John S. Schultz