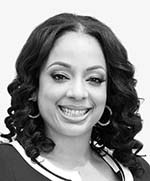 When Melanie Williams couldn’t find a job after graduating from Wayne State University, she created her own position and became a public relations practitioner. Her first client was someone who had noticed how hard Williams worked on a project during a college internship.

She started in 2007 as Yellow Brick Road Communications, but in 2012 she changed the business name to Guru Public Relations Events and Concierge in Detroit.

“I wanted to rebrand it because, at that time, I was working with Ford and Lincoln on their multicultural campaign,” Williams says. “I wanted to … fit the corporate scope of what I was doing.”

In addition to her automotive clients, Williams works with health care, technology, and nonprofits in metro Detroit as well as in Atlanta, New York, Los Angeles, and Chicago. She’s helped plan the BET awards and the Ford Neighborhood Awards.

A fair amount of Guru PR’s business is media relations. You can find Williams’ clients in local publications and on local broadcast media, as well as in national outlets like Essence, Rolling Out, and Black Enterprise magazines, and The New York Times.

“I love what I do,” she says. “I like bringing my clients’ dreams and goals to fruition.”

One client that strikes a personal as well as a professional chord with Williams is the Detroit chapter of the Real Life 101 Scholarship Fund, a national college scholarship and mentoring program for at-risk African-American men. Williams recently organized the chapter’s annual event at the MGM Grand Detroit.

“I would say my secret to success is something my mentor told me a long time ago,” Williams says. “She told me to remember that the client is always right.”