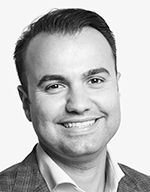 Matthew Sharrak’s career path was set at a young age, thanks to two distinct work experiences. He started working at his uncle’s pager shop in Detroit when he was 15, and at age 18, he began selling women’s shoes at Nordstrom.

“I loved technology and I loved the customer service at Nordstrom,” he says. When he was 20, Sharrak found a way to combine both passions by using his savings to acquire a Sprint franchise in Macomb Township.

He sold that store four years later for $350,000 and, with the proceeds and with some help from his uncle, Nash Khami, opened two AT&T dealerships in 2009. Today, Midwest Mobility Solutions owns 24 stores in Michigan and 11 in Ohio, and has plans to open five more stores in the region by the end of the year.

Sharrak says he drives a “no excuses” company culture. “If somebody has a problem, we all get together and figure out what the problem is, and we overachieve on it and make it a focus,” he says. “Customer experience is the No. 1 thing. Whether it’s a problem created in our store — or even created by a competitor, another AT&T dealer, or a Verizon dealer — when the customer comes in, we’re going to own that problem and make sure the customer is happy.”

The company culture extends to the parts of the stores unseen by customers. “In retail, the back rooms are only an afterthought,” Sharrak says. “AT&T prescribes what the front of the house looks like, but we went above and beyond by hiring a designer to make the back rooms really nice.”

Sharrak sees plenty of growth ahead. “Small businesses accounted for 5 percent of new service activations last year,” he says. “By next year, we expect 50 percent of our new accounts will be with small businesses.”