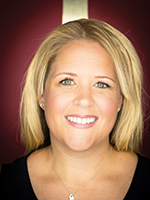 After seven years of selling sponsorships for several National Hockey League teams across the country, Troy native Kathleen Borschke was ready to come home. With no direct job leads, she researched companies that organized sponsorships for major events in metro Detroit and found Birmingham-based Fulkerson Group. Taking a shot in the dark, she sent founder Tavi Fulkerson her resume and pitch, despite knowing there were no open positions. The gamble paid off; Fulkerson took a chance on Borschke and now, nearly four years later, Borschke is a senior account director working with such clients as the North American International Auto Show, the Detroit Jazz Festival, and the Chevrolet Detroit Belle Isle Grand Prix. Borschke’s key focus, and self-described “baby,” is the Grand Prix, where she works with 55 different sponsorship partners. Though others may view the increase in attendance (the 2014 event saw the largest attendance since it returned to Detroit in 2007) and sponsorships as a mark of success, she sees it differently. “When you look at the events we work on, some of the sense of achievement you feel is what is going on with Detroit, as well,” Borschke says. “Seeing what (the Grand Prix) has done for both Belle Isle — we cleaned up the park, made it more inviting for residents year-round — and our sponsors, many of which, like Chevrolet, are Detroit-based, has been great.”