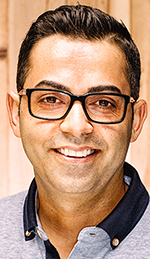 When the ReMax agency where Joe Kadaf worked for several years appeared to be on its last legs, Kadaf could have done the easy thing and hooked on with a different agency. His impressive sales record would certainly have put him in demand. But Kadaf saw untapped potential in the seemingly dying agency, so he bought it from his employer and committed himself to turning the company around. Five years later, with two offices and a third one about to open, ReMax Leading Edge has topped $121 million a year in gross sales. “We’ve combined an embrace of the latest technology with the creation of an energetic atmosphere,” Kadaf says. “When people think real estate, they think coffee-drinking and water coolers. I created a powerhouse, a machine, with agents that just move one after another.” The key, Kadaf says, was in aiming for the top. “I knew I could go hire mediocre agents who would do the same business they’d been doing all their lives,” he says, “or I could go for the top 1 percent who want to take their business from what it is now to what it could be.” Once he hired the best, Kadaf says, he created an atmosphere that “rewards the best, and helps the best to be even better.” — Dan Calabrese