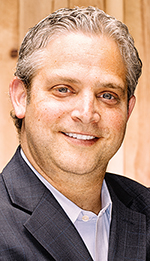 A self-described “startup junkie,” Jason Raznick launched several enterprises while attending the Ross School of Business at the University of Michigan in Ann Arbor. “I had an online textbook business, an online dating site, and in high school I tried to do a digital TV recording business, but I couldn’t make it work,” he says. “Four years later, TiVo came out and did the same thing.” Following graduation from college, Raznick started working in the ecommerce sector and dabbled in real estate and mortgage lending — all the while writing investment articles for an array of media outlets. “I wanted to give the average person access to the same tools and education that the 1 percent of investors has,” he says. “There was a deep divide there, and that’s how Benzinga got started.” Launched in 2010, the company at first wrote and distributed financial articles, then added investment webinars, online courses on trading, and a platform where people can follow an expert who makes trades. “We make money by licensing our content and selling subscriptions,” Raznick says. “The market here is so much cheaper than if we had our operations in New York, but we’ve grown enough now that we will be opening a satellite office there soon.” While Benzinga doesn’t provide investment advice, it does offer the latest financial news. “We provide everything to help our customers make informed decisions, as if they were right there on Wall Street,” he says. — R.J. King