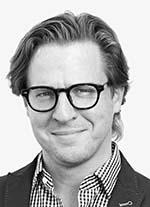 Daniel Zwolak started Seeds Marketing+Design in 2008, around the time the world’s economy was plunging into its worst downturn since the Great Depression. His timing was perfect.

“If the world were to end tomorrow, there would be a lot of going-out-of-business sales,” he says. “And they would need advertising.”

When he opened his doors, there were startups that needed help with logos, branding, and marketing, due to the fact so many workers who had been laid off were becoming independent entrepreneurs. Zwolak took the plunge himself after spending several years at different advertising firms in downtown Lansing.

“At the other agencies, we’d get a lot of small businesses — they were boot- strappers, and you just knew they were walking through the door and money was an object,” he says.

“This was something they were choosing to invest in, and that always just struck me.”

Part of his good fortune was partnering with one of his clients, MVP Collaborative, an agency in Madison Heights that produces live events, video, and digital programs. Zwolak says his firm and MVP bring things to the table that the other agencies don’t offer, and each has contributed to the other’s success. Zwolak and his staff also grew the company by brainstorming ideas for prospective clients they’d like to work with, and then approaching those businesses.

“What are the brands that we as consumers love and what are the stories that inspire us?” he asks. “You just want to be a part of that.” That’s what his company told clients Audi, Mills Pharmacy, Great Lakes Coffee, Bell’s Brewery, and Bow Wow Baketique.

“Every day (we) live and work (vicariously) through all of our clients,” he says. “When we talk to them, when we get to know them, we become an extension of them. That’s what we rally around, (and) that’s what keeps us showing up every day. For us, that’s the magic.”