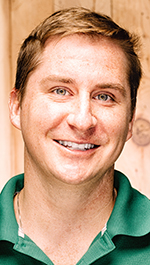 In 2008, Dan Ryan was a young, up-and-coming TV sports producer in New York when a layoff threw his career in an unexpected direction. Returning home to Detroit and finding competition fierce for a limited number of jobs, Ryan soon took inspiration from a cousin who, along with a partner, had started a business hauling rubbish via a “beat-up cargo van.” It wasn’t long before Ryan decided he could do better as an entrepreneur rather than diving back into TV sports. Ryan and Patrick Lipa acquired two franchises — College Hunks Hauling Junk and College Hunks Moving. It wasn’t long before the duo upgraded their trucks and equipment, and moved into new office space in Madison Heights. “It’s not a glamorous business, but I tell everybody we’re in the customer service business,” Ryan says. “Where we’re different is that we immerse ourselves in helping others, whether it’s food drives for Gleaners Community Food Bank of Southeastern Michigan or collecting art supplies for needy schools.” Over the next few years, Ryan and Lipa, who respectively handle sales and operations, plan to expand into the Ann Arbor market and the west side of the state. — Dan Calabrese