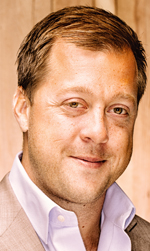 A self-starter, Dan Mullen began working odd jobs when he was 13 years old, including stints as a janitor, a ditch-digger, a lawn-cutter, and a car-washer. “I was out there hustling any way I could,” he says. “I was really passionate about work; it just drove me.” In 2003, Mullen was hired as a mortgage banker at Quicken Loans Inc., which was then located in Livonia. “I worked hard, was promoted, and eventually met (founder and chairman) Dan Gilbert,” Mullen says. When the decision was made to move nearly 10,000 workers from Quicken Loans and its affiliated companies to downtown Detroit, Mullen was the first person hired to lead the project. Soon after, Bedrock Real Estate Services was formed; today the company manages 7.5 million square feet of office, commercial, and related space. “We started out with master planning, which evolved into retail planning and place-making,” Mullen says. “One project we had early on was developing the Madison Building, which today houses Detroit Venture Partners, a business incubator in the digital space, as well as outside businesses like Skidmore Studios and Twitter. We did everything from the initial vision to working with Dan’s wife, Jennifer, on the final fit and finishes.” In addition to helping oversee the renovation of several historic office towers as well as the construction of parking decks, Mullen says he and his team are looking to optimize the development of the M-1 Rail line that is set to begin service by 2017 along Woodward Avenue, from downtown to New Center. “One of our goals is to create these unique retail places that people can’t find anywhere else,” he says. “If we can create this sense of place, people will want to live and work here.” — R.J. King