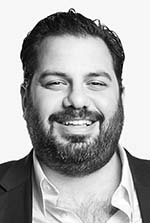 Based on the notion “most men hate to shop,” Christopher George and John Haji created the Gentleman’s Box, a high-end subscription service that caters to men, and delivers them grooming products, style advice, and fashion essentials on a monthly basis.

“As a busy man myself, I never had time to shop and I never got to see what new fashion items were available to me,” says George, CEO. “The Gentleman’s Box brings the latest fashion and accessories to your door each month along with the latest issue of GQ magazine.”

A recent box, based on a tribute to golfing great Arnold Palmer, contained a pair of argyle socks, silver-plated golf cufflinks, a flask, GQ magazine, a face moisturizer for men, half and half (lemonade/iced tea) Arnold Palmer mix, and a one-year subscription to Golf Digest magazine. George says each box subscription is $25 per month ($33 international); however, buying an annual subscription will get you one month free. He says the value of each box is $75.

George, who grew up in Bloomfield Hills, was 21 when he started his first business, Echo Management Services, a collection agency in Warren that he still operates. In 2012, he launched his first online business, K&G Wholesale, a harbinger to Gentleman’s Box.

His advice to young entrepreneurs: “Always choose what you love doing. Don’t do something just for a paycheck.”