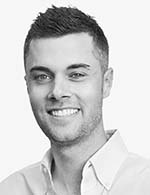 After a brief run in the advertising world in 2010, Chris Roebuck began offering a technology service that allowed companies to collect and analyze customer data from the field such as consumer trade shows, conferences, or product launches. He also offered a digital geo-location service where a grocery store, for example, could send incentives to prospective customers in a given area via their smartphones.

“From there, we started focusing on the rising use of video, and the fact that while there was a great deal of future growth, the content wasn’t easily engaged,” says Roebuck, CEO of Clicktivated Video Inc. in Birmingham. “We decided to pivot and develop an on-demand, touchable interactive experience.”

To wit: A cooking video that’s equipped with Clicktivated’s behind-the-scenes software allows a viewer to touch or click on an item they like in the video — such as a stainless-steel oven or a dining room table — on their computer or smartphone screenon products. In an instant, the technology provides the user with a direct link to view and purchase the item.

“How many times have you watched a video and set out to find a way to buy (something you saw in) it?” Roebuck says. “With our service, you can click on the direct link, or one or multiple links can be saved to access later.”

Initially, the company focused on signing up fashion and retail outlets. They have since expanded into travel and entertainment. Clients include Style Network, Pure Michigan, Vanity Fair, Detroit Hustles Harder, and Bohemian Guitars, among others.

“The marketplace has really embraced our technology, and we’re becoming an international company by working with clients in Hong Kong, the Philippines, London, England, and Singapore,” Roebuck says. “But we want to work with as many local companies as possible, whether it’s on the development side or as a client. We’re definitely in the hiring mode.”