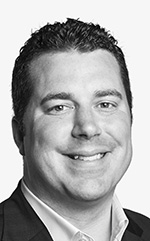 Ask Tony Lamerato to describe the most challenging part of any job in the broadcasting business and he responds without hesitation. “There’s so many different avenues now where someone can get their news,” he says. “Facebook, Twitter, Instagram, you name it.”

Then he goes on to explain why none of that matters when it comes to the live sports programming he’s responsible for selling at Fox Sports Detroit, the second-ranked sports network in the country.

“We believe we’re really in the golden age of live sports,” Lamerato says. “We call it the last giant standing, where we feel our TV rating has a heartbeat. So the people (who) are watching us are watching intently. All the metrics we have confirm that live sports is DVR-proof; it’s appointment-based television.”

Lamerato grew up in Sterling Heights, played basketball at Aquinas College, and eyed a career with a sports team. Following a summer internship with the Detroit Pistons, he ended up majoring in sports management, which led to a job that means he’s not only talking Pistons every day with his clients, but also covering the Tigers, Red Wings, and Lions in various capacities.

“I’ve been able to increase revenue for FSD on the local regional side to have a record-breaking year locally,” he says, “and for the fifth straight year as a company, we also had a record-breaking revenue year.

“What’s happened the last five years in downtown Detroit, it’s so exiting,” he adds. “For someone young like myself, I feel like I can be a part of something bigger than me, I can be part of a turnaround. You can feel the movement, the vibe, the energy, the creativity, and, really, the spirit of entrepreneurship — and all of that all fuels the passion of Detroit sports.”