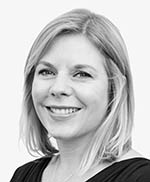 Since she was a young girl in Jamestown, N.Y., Amy Peterson wanted to work for a Major League Baseball team. Today she’s an associate counsel for the Detroit Tigers, where she reviews sponsorship contracts and provides legal counsel to the club’s front office.

In addition to that position, she took on a second career after settling in a residence located near the Coalition for Temporary Shelter — or COTS — on Peterboro Street in Detroit’s Midtown district.

“I would walk my dog and have conversations with the shelter’s residents (women and children), and hear courageous stories of how they left really challenging situations in search of better opportunities,” Peterson says. “After so many of those conversations, I had one of those light-bulb moments. I was incredibly grateful to the city and everything it had done for me, so I thought it was time to return the favor. That was the catalyst for starting Rebel Nell.”

In 2013, Peterson and her business partner, Diana Russell, began to make jewelry on their own to raise seed money. In July of that year, they won a Detroit Soup micro-grant, and in December they hired the first of five employees. “We don’t hire a lot, but we go very deep with the ones we do,” Peterson says. “We give them the tools that we were fortunate to have that allowed us to be financially independent, like doing a budget. We also instill the value of hard work and dedication.”

Part play on words, part homage to former first lady and women’s advocate Eleanor “Nell” Roosevelt, Rebel Nell’s employees are women from COTS. They produce sterling silver jewelry made from the paint chips that have crumbled from the city’s many graffitied walls; the earrings and necklaces are sold online, at art fairs, and at retail stores in 13 states.

Peterson says the jewelry line reflects the women’s personalities. “It creates an amazing connection between the woman who made it and the one who buys it,” she says. “If that person is really proud to wear that piece, it makes our women feel incredibly empowered and accomplished.”