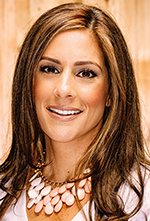 Kitchen designer and entrepreneur Alisha Serras was 18 months into her Ph.D. in clinical psychology at Eastern Michigan University when she discovered Scavolini Italian kitchen cabinetry. Impressed, she dropped out of school and opened Scavolini by Cucina Moda in Birmingham in 2010 along with her husband, Brian Gamache, and her sister,Niki Serras. Despite a sluggish economy, the company has tripled its revenue over the past three years. As lead designer, Alisha says every client’s home gets her final approval. “We put a Ferrari-red kitchen in our front window when we opened and became known as the store with the red kitchen,” she says. “We believe that Italy is ahead in the design world, and we bring these styles and trends to Michigan before anyone else does.” The company’s geographic reach stretches from Birmingham to Las Vegas, and Alisha’s clients originate from a variety of backgrounds. “We find that engineers tend to love Scavolini because of its clean lines,” she says. “Our clients come to us with a vision of doing something different, and (they want things) 100-percent personalized.”  — Gary Witzenburg