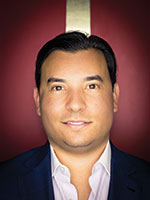 Fishing on Pine Lake on a late Sunday afternoon in early July, Aaron F. Belen got a call that Hollywood stars Ben Affleck and Jennifer Garner had just sat down for dinner at Bistro 82, his new restaurant in downtown Royal Oak. Affleck, in town for the filming of Batman vs. Superman: Dawn of Justice, was celebrating the couple’s ninth wedding anniversary. “Our staff is well-trained, so I didn’t feel as if I had to drop everything and get to the restaurant,” says Belen, president and CEO of AFB Investments and AFB Hospitality Group, both in Berkley. From his roots investing in commercial real estate — he got his start at 18 years old — Belen now owns and manages more than 50,000 square feet of space, including Bistro 82 and Sabrage, a nightclub on the second floor of the restaurant, as well as an Einstein Bros. Bagels outlet in Berkley, a food distribution center in Detroit, and private offices. “I am very passionate about hospitality, and I think we absolutely moved the needle for fine dining in downtown Royal Oak,” he says. “We’re drawing entertainers, business executives, professional athletes, and people who appreciate fine dining and an upscale nightclub scene.” Belen says he wants to open additional restaurants and commercial offerings, but isn’t interested in being “a big chain.” Rather, “it all starts with finding talented people and encouraging them to stay in Michigan,” he says.