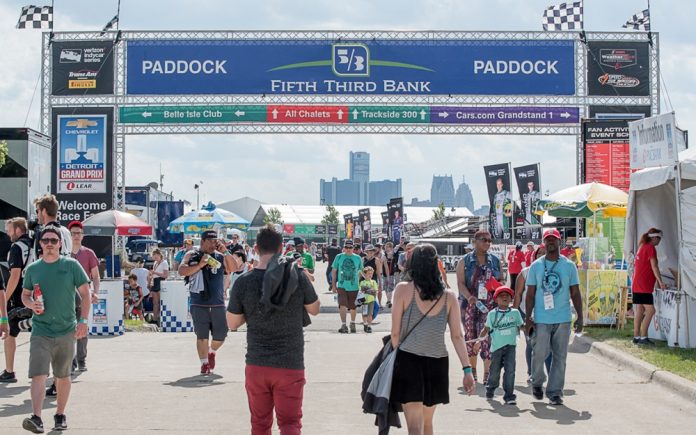 Organizers of the Chevrolet Detroit Grand Prix presented by Lear today announced several changes for the May 31-June 2 event at the Raceway at Belle Isle Park. Tickets to the 2019 Grand Prix go on sale Tuesday, Oct. 9.

For the first time in the history of the Detroit Grand Prix, all ticketholders will have access to the Fifth Third Bank Paddock — known as the “locker room of motorsports.”

Included with all tickets, fans will be able to see race teams and drivers up close in the garage area and have access to the historic James Scott Memorial Fountain where they can experience the Autotrader Winner’s Circle throughout the weekend.

New viewing experiences will also be available to Grand Prix fans, with Cars.com Grandstand 1 relocating to the opposite side of the race track, across from pit lane.

The new location will provide fans enhanced viewing options of the racecars coming down the fast front stretch, along with the action in the pits and the on-track battles entering Turn 1. The corporate chalets, meanwhile, will replace the space occupied by Grandstand 1.

With the new Oudolf Garden coming to Belle Isle, there will no longer be a grandstand in Turn 5. A new general admission Grandstand 7 will be located in the “horseshoe” at Turn 7, featuring sightlines of the cars coming off the fastest part of the track on the back stretch.

In addition, the Chevrolet Front Stretch Bridge over the track and pit lane will be open for everyone to visit the Fifth Third Bank Paddock and Scott Fountain, including easy access from the new Cars.com Grandstand 1 location and the City of Windsor Grandstand 2.

There will also be a new pedestrian bridge over the track at Turn 8 to provide access to all the activities in the “horseshoe” for all ticketholders.

“We’ve listened to feedback from our fans and we’ve made some changes that we believe will create an even better experience for everyone at next summer’s Grand Prix,” says Bud Denker, chairman of the Chevrolet Detroit Grand Prix presented by Lear.

“With more access, new seating options, the opportunity for all ticketholders to get closer to their racing heroes in the Fifth Third Bank Paddock and at the Autotrader Winner’s Circle next to Scott Fountain, we couldn’t be more excited to celebrate the 30th Grand Prix in Detroit with our fans on Belle Isle in 2019.”

The Chevrolet Detroit Grand Prix presented by Lear will once again feature a diverse racing lineup with the only doubleheader weekend on the IndyCar Series schedule — the Chevrolet Dual in Detroit — along with the exotic sports cars of the IMSA WeatherTech SportsCar Championship racing on Saturday in the Chevrolet Sports Car Classic.

The Motor City Muscle of the Trans Am Series presented by Pirelli will also host a doubleheader with races on both Saturday and Sunday. The SST Series (flying trucks) will not return to Belle Isle in 2019. A number of special activities are planned to commemorate the 30th Grand Prix event held in the Motor City and more details on the celebration will be announced soon.

Tickets will go on sale beginning at 7 a.m. ET on Oct. 9, and two-time Chevrolet Dual in Detroit race winner — and the defending Indianapolis 500 champion — Will Power of Team Penske will be in the Motor City to help wave the green flag on ticket sales on Tuesday.