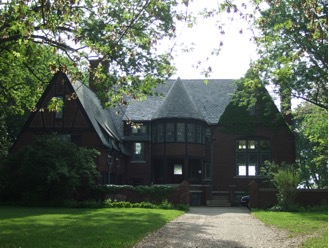 The Junior League of Detroit, a women’s group dedicated to education and volunteerism, will offer a sneak peek of an English Tudor house in Grosse Pointe Park ahead of its renovation next year as the 21st Designer Show House.

“This house has long been a subject of conversation in the community and we are excited to present it as a fully transformed Designers’ Show House in May 2016,” says Michelle Tiderington, president of the Junior League. “It is a really fun and interesting opportunity to see the house during the sneak peek event as a raw and unfinished product.”

Tiderington says the 5,300-square-foot home and gardens, located at 15500 Windmill Pointe Dr., will be renovated with the assistance of local interior designers, artists, landscapers, and decorators. The architectural firm of Benjamin and Straight designed the home in 1927 for Col. Jesse Vincent, an aircraft designer and vice president of engineering at Packard Motor Car Co. in Detroit.

Tiderington says unique features of the home include a canal that runs from Lake St. Clair through the yard to a dry dock under the living room. She says the house will be open on Nov. 14-15 for tours.

The renovated home will open for public tours May 7-22, and will feature a marketplace with dozens of vendors and a café.

Proceeds from the 2016 Designers’ Show House will support the Junior League of Detroit’s new health initiative — Project EAT — which will work to provide healthy eating opportunities for Detroit children and their families.