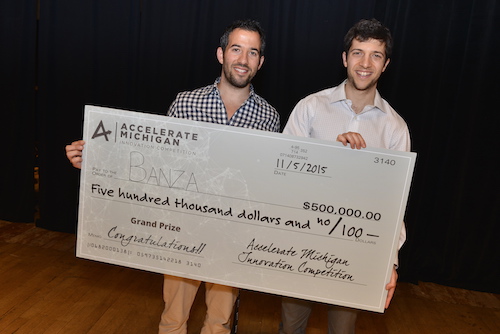 The seventh annual Accelerate Michigan Innovation Competition, a nationwide pitch event to be held Nov. 3, will be moved to Cobo Center in downtown Detroit and feature a new program that consolidates the event into a single day.

Previously, the competition, which offered selected companies the opportunity to win up to $500,000 by pitching business ideas to a panel of investors, spanned three days and was held at the Westin Book Cadillac Hotel in Detroit.

“A big thing for us this year in terms of modification is trying to consolidate the program,” says Seun Oyewole, director of Accelerate Michigan. “We really want to ensure that these companies have the greatest amount of exposure, given that we have 70-plus venture capital funds from across the country coming here.”

He says this year’s event will use Cobo’s new technology offerings, which include a fiber network, digital message boards, and increased bandwidth. The program also will do away with a keynote speaker or panel speakers, which were offered at previous Accelerate Michigan Innovation Competitions.

“We’re just keeping a straight focus on companies,” Oyewole says. “We’re doing all the pitches in the morning, the final pitches in the evening, and announcing the winner later that night.”

After completing the event’s application process, 36 companies will be selected to participate in the competition, which is open to high-growth companies from a variety of industry sectors, including high-tech, advanced manufacturing, life sciences, health care, consumer products, and more.

Registration for the competition, which includes submitting a two-page executive summary and a 10-page slide deck, is open until Sept. 2.

Founded in 2010, Accelerate Michigan is managed by Invest Detroit and attracts more than 200 company applications and invests more than $1 million into the local startup community. Banza, a Detroit-based food company that produces pasta made from chickpeas, was the winner of last year’s $500,000 grand prize.