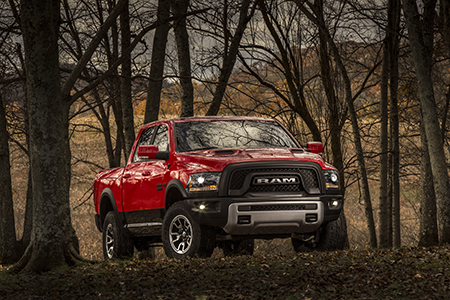 “Offering an off-road-style package on the Ram 1500 has been on our to-do list for some time but the right combination didn’t present itself until now,” says Robert Hegbloom, president and CEO of the Ram Truck Brand at FCA US. “The Rebel drops right into a core segment of the truck market with unique design cues and can-do attitude backed by Ram Truck engineering.”

Set to go on sale in the second half of 2015, the Rebel comes standard with 33-inch all-terrain tires designed for rugged good looks, all-season handling, and a comfortable ride. The combination of these larger tires and a 1-inch suspension lift yield best-in-class ground clearance of 10.3 inches, Hegbloom says.

Both engines are available with a rear anti-spin differential, which turns both rear wheels in tandem when increased torque is applied — helpful in off-road driving conditions, Hegbloom says. The design automatically unlocks the differential for normal on-road driving, allowing the wheels to spin independently for improved drivability.

The vehicle’s city and combined mpgs are also highest among all pickups at 21 and 24, respectively.

“Fuel efficiency is at the top of truck buyers’ priorities, and Ram is the recognized benchmark for the industry,” Hegbloom says. “Twenty-nine miles per gallon cuts through the clutter. Ram invested in powertrain technologies and those are paying real dividends in the wallets of our customers.”

The EcoDiesel HFE will go on sale late first quarter of 2015.