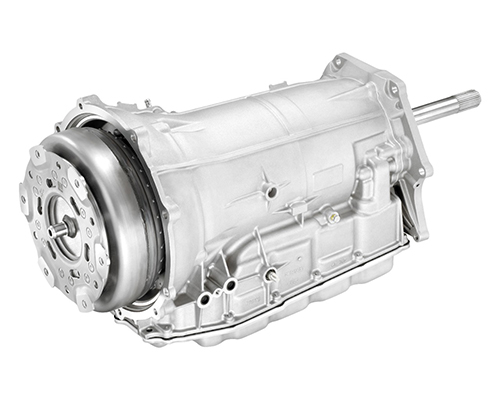 An eight-speed paddle-shift automatic transmission will be offered in the Chevrolet Corvette Stingray for 2015, providing up to five percent greater efficiency when compared to the previous six-speed automatic.

The 8L90 transmission — built at the automaker’s Toledo transmission facility — is based on the same eight-speed automatic that will be offered on the supercharged 2015 Corvette Z06 but uses specifications matched to the torque capacity of the Stingray’s 6.2L V-8 LT1 engine.

“It was designed to enhance the Stingray’s driving experience, with performance on par with dual-clutch designs, but without sacrificing refinement,” says Bill Goodrich, GM’s assistant chief engineer for eight-speed automatic transmissions.

With four gear sets and five clutches, along with new packaging, the new eight-speed automatic fits the same space as the previous six-speed automatic, Goodrich says. Composed largely of aluminum and magnesium, the transmission is more than eight pounds lighter than the six-speed and claims design features that reduce friction.

Goodrich says he expects the transmission will lend itself to greater fuel economy, although EPA fuel economy test results are pending.

In related news, the 2015 Fiat 500 Abarth and Abarth Cabrio, to be showcased at the 2014 New York International Auto Show April 18-27, will be available with an optional six-speed automatic transmission.

“Adding an optional automatic transmission makes the Abarth and Abarth Cabrio accessible to an entirely new group of customers who want to enjoy the thrilling driving experience of the Fiat 500 Abarth with the convenience of an automatic gearbox,” says Jason Stoicevich, head of Fiat Brand for North America Chrysler Group.

The 2015 Fiat 500 vehicle lineup, available at dealerships starting in July, will also include a number of interior changes, including an advanced instrument panel with a 7-inch high-definition display that allows drivers to more easily monitor information including speed, fuel level, Eco index, and trip information. Other updates include a redesigned center console and Bluetooth streaming audio.