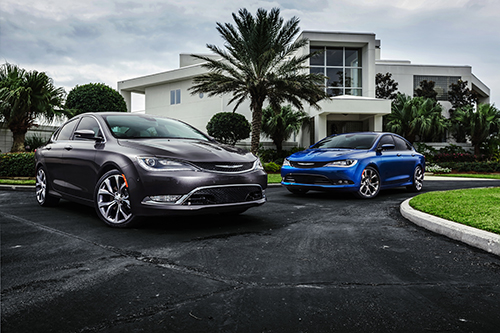 “We designed the car to take on every other vehicle in its class,” says Al Gardner, president and CEO of the Chrysler brand. “A flagship car requires a flagship manufacturing facility. (We) invested over $1 billion in the Sterling Heights facility and people.”

The redesigned model offers standard nine-speed transmission, an advanced all-wheel drive system, and new LED lighting in the front and rear of the vehicle.

The new midsize sedan is available in four trim levels, including the new 200C premium level. It is expected to arrive in dealerships in the second quarter, with a starting price of $21,700, not including the $995 destination charge.

Chrysler also revealed the newest high-impact exterior paint color for the SRT Viper today at the auto show. “Stryker Green” is an evolution of the “Snakeskin Green” exterior color that first appeared in 2008, which features enhanced green and yellow pigments and a “liquid mercury” appearance.

“We’re continuing to develop and build unique, low-volume, special-edition colors for the Viper that adds to the exclusivity of our American-built flagship supercar,” says Ralph Gilles, president and CEO of SRT Brand and Motorsports. “Every SRT Viper is painted with a process that is very similar to what we use for our show cars.  The application of the new Stryker Green exterior paint is a very detailed and intricate process, taking approximately eight hours to complete.”

The Stryker Green exterior color will be available starting in February in the Viper GTS price class and the SRT price class with the new GT package.

In other Chrysler news, Fiat S.p.A. Chairman John Elkann said today that Sergio Marchionne will remain CEO of Chrysler-Fiat for the next three years.