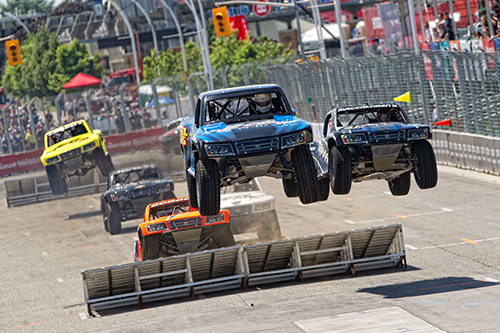 The Chevrolet Detroit Belle Isle Grand Prix has teamed up with Palace Sports & Entertainment in Auburn Hills to work on promotional opportunities leading up to race weekend May 30-June 1. In addition, race officials announced Friday the Speed Energy Stadium Super Truck Series will compete at the Grand Prix.

Set to fly from metal ramps set on the course — on off-road courses the trucks reach as high as 100 feet in the air — the SST Series is unique in the sense that all trucks are identically prepared and delivered to drivers in race-ready condition. As a result, drivers do not have an advantage over others because they have a bigger budget or greater technology.

“All the fans at the Grand Prix are going to love watching the SST Series trucks in action,” says Bud Denker, chairman of the Chevrolet Detroit Belle Isle Grand Prix. “These trucks can just fly, and it will be incredible to watch them battle wheel-to-wheel on the streets of Belle Isle.”

The partnership kicked off Friday at the Palace during the Detroit Pistons game against the Brooklyn Nets. The venue displayed a Grand Prix 2014 IndyCar and a truck from the Stadium Super Truck Series, and welcomed SST driver and reality TV star Arie Luyendyk Jr.

Another cross-promotional opportunity will take place on March 5, when the Pistons play host to the Chicago Bulls. In addition to featuring various Grand Prix vehicles and giveaways, fans will be offered special race tickets.

Come Grand Prix weekend, the Pistons will feature a display in the Meijer Fan Zone, which will allow Pistons fans to connect to the race through interactive activities. Pistons players and legends will also make special appearances.