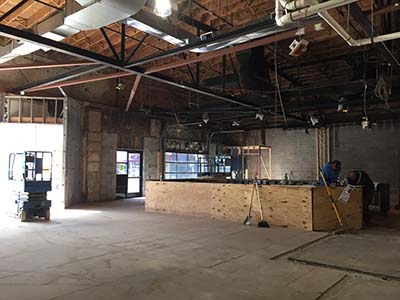 The partners behind One-Eyed Betty’s in Ferndale are opening up two new restaurants in the former location of Buffalo Wild Wings on West Nine Mile — Pop’s for Italian, a wine-centric restaurant, and The Daily Dinette, a fast-casual eatery that will be open 24 hours a day.

Beth Hussey, a partner in the venture along with Kevin Downey and Brian Kramer, says Pop’s is an Italian concept, with a focus on a wide variety of wine. The partners have invested in a wine preservation system, so all of the wines can be offered by the glass, along with tastes and half glasses.

Hussey says they plan on opening one of the restaurant concepts in December, with the other following in the next few months.

“What One-Eyed Betty’s is to beer, Pop’s is to wine,” Hussey says. “There will definitely be a good mix of approachable wines to some boutique and esoteric wines.”

The 200-seat restaurant, located at 276 and 280 W. Nine Mile Rd., will feature Neapolitan-style pizzas. She says her team spent time in Italy and California learning how to make this specific style of pizza.

“It’s (cooked in) a very specialized wood-burning oven that cooks the pizza at 900 degrees in 90 seconds or less,” Hussey says. “It’s (made with) very simple, fresh ingredients. We’ll be making our mozzarella fresh in house.”

She says the menu, created by chef Emmele Herrold, who’s also the chef at One-Eyed Betty’s, will feature six different sections including grilled breads with different toppings, homemade pastas, salads, and “Pop’s chops” such as a bone-in rib eye, lamb chops, and a whole fish.

“Our vision is that people will come in and order dishes from every section of the menu,” Hussey says. “It’s unique because a lot of restaurants are doing small plates, but we’re doing big plates.”

Birmingham’s Ron and Roman designed the space, featuring high, natural wood ceilings, a horseshoe bar, and a wine and beer garden with slate floors and tree branches that’s designed to replicate an Italian piazza (a city square). She says the interior design company created a via (or pedestrian alley) within the space so guests can enter either from Nine Mile Road or the parking lot behind the restaurant.

The other side of the space will feature an entirely different restaurant concept, The Daily Dinette.

“(The Daily Dinette) has everything you might want in a day,” Hussey says. “The one kind of thing that’s lacking in Ferndale is something that’s available 24 hours.”

She says guests will order at the counter and then either take the food to go or dine in at the 60-seat restaurant with a large communal table.