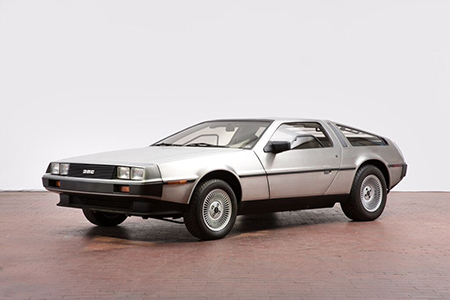 The Berlin-based online auction house, Auctionata, will auction a 1982 DeLorean DMC-12 that was originally owned by John DeLorean, the former head of General Motors Co.’s Pontiac division and founder of DeLorean Motor Co.

“The DeLorean is a truly interesting vehicle because of its great pop cultural references and its very special significance in American automotive history,” says Wolfgang Jochum, head of the classic cars department for Auctionata. “This car has both a great story and the best provenance possible, which makes it a great collector’s piece and a rarity on the market.”

The 1982 DeLorean DMC-12 was a gift from DeLorean to his wife, actress and model Cristina Ferrare. The car has been driven 13,500 miles and will be offered at the starting price of around $38,000. The DeLorean features gull-wing doors, a fiberglass chassis and underbody structure, and a brushed stainless steel body.

The DeLorean DMC-12 is best known for its appearance in the Back to the Future film series that allowed characters Emmett “Doc” Brown (Christopher Lloyd) and Marty McFly (Michael J. Fox) to travel though time as the time machine. The car was equipped a “flux capacitor” powered by plutonium.â€‹

In 1973, DeLorean left GM to form the DeLorean Motor Co., and one model was produced, a two-seater sports car. About 9,200 vehicles were manufactured in Northern Ireland from 1981 to 1983. While about 20,000 orders were placed for the vehicle before the start of production, the 1982 DeLorean DMC-12 was not able to keep up with competition due to its heavy weight and an underpowered engine. The DeLorean Motor Co. went into liquidation in February 1982.

Detroit-native DeLorean designed cars such as the Pontiac GTO muscle car, the Pontiac Firebird, and the Chevrolet Vega throughout his career. He died in New Jersey in 2005 at the age of 80.

The auction will be broadcast via livestream on Auctionata.com