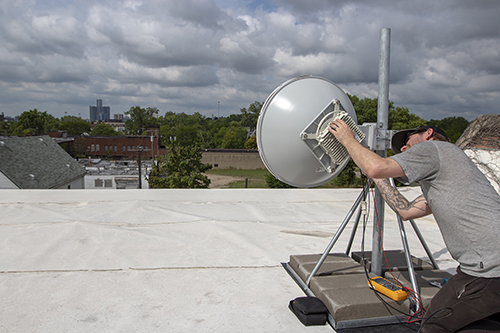 The Detroit Community Technology Project, which promotes digital literacy, education, and creation through multiple programs, including the Equitable Internet Initiative and Digital Stewards, has partnered with 123Net in Southfield to distribute Gigabit internet connections to at least 150 homes in Detroit.

Digital Stewards, community members who are trained by DCTP in technical skills and community organizing, distribute and maintain the connections throughout the neighborhoods. The Digital Stewards share a passion for digital literacy and a desire to expand their own knowledge base.

“123Net sees what we see in Detroit. They understand that this city is experiencing tremendous growth, but too many people are being excluded from that growth,” says Diana Nucera, director of the Detroit Community Technology Project. “Our goal is to empower our community to own digital infrastructure and change the narrative of the internet from a place of consumption to a place of creation.”

123Net, an internet service provider focused on equipping businesses with industry-leading data center, voice, fiber, fixed wireless, and other network services, says it is excited to partner with DCTP through its Equitable Internet Initiative.

“We know that in a city so poorly connected, our residents won’t be able to attain the opportunities, education, and careers that they deserve to pursue,” says Dan Irvin, CEO of 123Net. “The Detroit Community Technology Project focuses on preserving the rich culture of the city by progressing the digital literacy of the population, and we saw an opportunity to use our infrastructure successes to advance that goal.

“We hope to be able to help DCTP leverage our experience and technology to propel Detroit’s inevitable development by empowering Detroiters to control their own network.”

123Net also operates the Detroit Internet Exchange, and maintains the largest, private carrier hotel and peers with technology leaders such as Google, AWS, and others. For more information, visit https://www.123.net/news