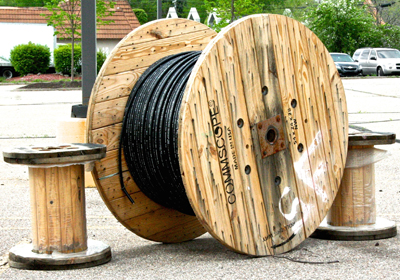 Southfield-based Internet provider 123.Net continues to grow its fiber network via its various acquisitions — including the recent addition of customers of the Michigan Internet Communications Association, one of the first regional Internet service providers in southeast Michigan.

Over the past 12 months, the company has added nearly 500 route miles of fiber, expanding its base to about 2,500 route miles across the state. Chuck Irvin, the company’s outside plant engineer, who works with cabling and supporting infrastructure, says the network has additional plans to grow even more and will further help businesses across Michigan.

“While we’re nowhere close to expanding the reach of fiber to the entire footprint of the state, the more quickly we (can accomplish the task makes us) a differentiator for our state,” Irvin says. “That connectivity and high capacity of bandwidth drives high-tech businesses to this state — just look at some of the new stuff going on in Detroit.

He sys plugging in Detroit with fiber and getting them ready for high-tech businesses to come in and use will continue to drive the growth of the city as well as businesses in Michigan.

Irvin says at its core, fiber set within a pliable glass tube transmits data rapidly via lasers set at each end of a transmission line. “With cable Internet, the maximum you might be able to get is 100 megabits (per second). With fiber, we have the ability to deliver 10 gigabits per second. So we’re talking about a massive amount of capacity,” he says.

While a cable connection or DSL may provide enough Internet capacity for small businesses, Irvin says a tech company, or any type of business that has extreme demands for Internet connectivity, typically needs fiber.

He says the company’s recent fiber expansion has come via two main fronts: building a connection directly to a business, and bringing new connections into a city. Each new PoP installed increases the number of potential customers the company can provide large quantities of bandwidth.

Through 123.Net’s most recent fiber swaps, acquisitions, and new construction, the company has expanded the bandwidth support in core hubs like metro Detroit, Grand Rapids, and Lansing. Additional routes were also added to better serve more rural markets, with an emphasis on northern Michigan.