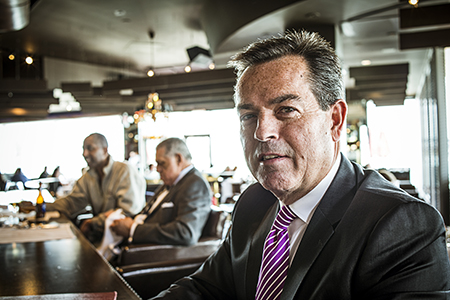 After selling his marketing and research company a few years back, Terry Olson, at the ripe age of 40, got a quick education on retirement. “I drove my kids to school and taught them (to appreciate) the finer things in life; I sat on five different boards; and I invested in real estate — but I still had that desire to start another company from scratch,” Olson says.

Intrigued by the growing popularity of vodka, Olson began researching the marketplace. “I started looking at where the best vodkas came from, and it was either Russia or Poland,” he says. “I didn’t really want to do business in Russia, so I ordered a potato mix from Poland with the intention of doing as much of the work in Michigan as possible.”

As he worked to refine his recipe and production process, Olson, founder and CEO of The Rebel Spirits Group in Warren, got a call from a 250-year-old distillery in Poland that was eager to handle every aspect of the project, including bottling, labeling, and packaging.

“In February 2012, I flew to Poland with our senior vice president of sales and spent time with their chemist,” he says. “I was overwhelmed. Here was this amazing brick-and-mortar building that had been around for centuries, and you walk inside and it’s this clean space where everything is stainless steel.”

Dreaming up new names, Olson settled on ZIM’s — short for ziemniak, the Polish word for potato. Easy to remember and smooth on the tongue, Olson and his team figured out all of the distribution challenges — they work with Great Lakes Wine & Spirits in Highland Park — and created a marketing campaign.

In addition to advertising in upscale lifestyle magazines, he and his team called on stores and restaurants that offered ultra-premium vodka. “We spend time with retailers and do tastings at their events and other upscale gatherings,” he says. “Part of it is education. Only 3 percent of the vodka out there, like (the brand) Chopin, is made from potatoes. The rest is made from wheat, corn, rye, barley, or grapes.”

Offering two varieties — ZIM’s 59 (proof), with fewer calories, and ZIM’s 81, for the traditional connoisseur — the vodka is now available at more than 200 locations. “In five years, we plan to be in half of the United States as well as India, China, and North Africa,” Olson says. “We can’t grow too fast, due to supply, but as we ramp things up we will be a major player in the industry.” db