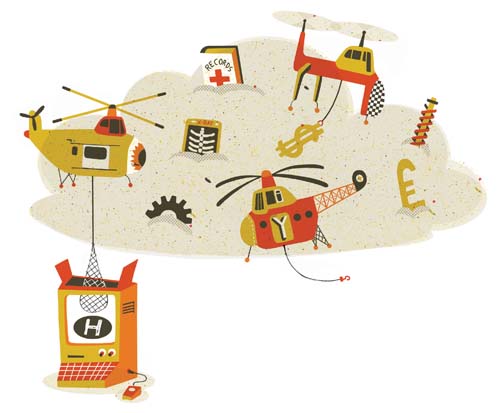 Good news: A cloud service under development in Bloomfield Hills will allow people to securely access business applications from any computer, and at lightning speed. Bad news: We may be tempted to toil every waking hour.

The new service, set to debut this summer, will be marketed to IT support providers and data centers that offer private, multi-site clouds to businesses and organizations. With the unusual, yet appropriate, name of Yottabyte (one quadrillion gigabytes), the company is moving into uncharted territory — shrinking data so that it can be managed and transmitted more quickly, and at a lower cost than conventional services offer.

“We’ve been told this was a project that couldn’t be developed in Michigan because we didn’t have the talent,” says Paul E. Hodges III, principal, president, and CEO of Yottabyte. “Well, we did it in Michigan, not Silicon Valley.”

The company, which recently partnered with VM Wear, a large provider of cloud infrastructure offerings in Palo Alto, Calif., sprang to life after Hodges and his partners, including Greg Campbell, developer of the software architecture, sold a series of Internet-related firms. “We literally sat around a table and said, ‘OK, what do we do next?’ ”

The company’s service will solve a major dilemma: how to better access and manage ever-increasing amounts of data.

One area that will surely benefit from this new service is the medical field. The government mandates that all electronic medical records must be stored in a secure location, but imaging and scanning systems such as X-rays chew up storage space. Decreasing the size of the data will provide multiple advantages over current storage systems. In addition, Yottabyte will allow doctors and nurses to securely share medical images or records. Any changes are saved instantly, and can be viewed by other pre-approved users.

Yottabyte’s prime customer base will include large generators of data such as banks and financial institutions, as well as manufacturers (consider that the average car has around 30,000 parts, while a Boeing 747 has as many as 6 million components).

Duane Tursi, vice president of sales and marketing, and a Yottabyte principal, says pricing will be based on the amount of gigabytes a company or organization uses per month. The service will be available in North America, Europe, and Asia.

“We will change the way people compute, manage, and manipulate data,” Tursi says. “It’s the next generation of cloud computing.” db