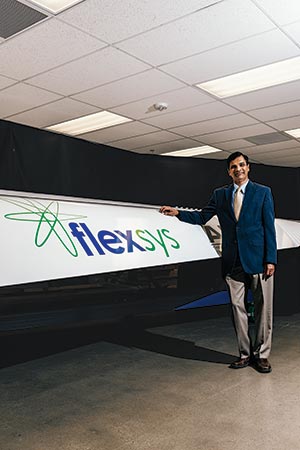 Since the days of the Wright brothers, aviators have sought the aeronautical Holy Grail of
a continuous, hinge-free wing that can “warp” to mitigate the turbulence, noise, and weight caused by traditional flaps.

Sridhar Kota, founder and president of FlexSys Inc., and a professor of engineering at the University of Michigan, says the firm’s FlexFoil technology may have wide-ranging implications for the aeronautics industry by reducing weight, noise, and fuel consumption.

“When an aircraft is landing, much of the noise you hear comes not from the engines but from the air going through gaps and creating vortices,” Kota says. “The FlexFoil system replaces the flaps with a seamless control surface that morphs to maintain top performance under different conditions. By eliminating the gaps, we can reduce noise by 40 percent and improve fuel efficiency from 3 to 12 percent.”

This is significant, as even a 1 percent
improvement can turn heads in an industry that spends $30 billion a year on jet fuel in the U.S.

FlexFoil technology was influenced by Kota’s interest in bio-inspired design. “In the engineering world we associate flexibility with weakness, but if you look to nature there are many
things — an elephant’s trunk, a shark’s fin — that are strong but also flexible,” he says. “That was the beginning of the concept I developed called compliant design: How to exploit the natural elasticity of materials like steel and aluminum. When I recognized I could change shapes and make a big difference in performance, I thought of aircraft wings.”

For the test, FlexFoil control surfaces were retrofitted onto the wings of a Gulfstream G-III business jet at the NASA Armstrong Flight Research Center at Edwards Air Force Base in California. Flight tests exposed the mechanisms to extreme load forces, chemicals, ultraviolet radiation, and temperatures ranging from minus 65 degrees to 180-plus degrees.

The FlexFoil control surfaces were shown to minimize drag as flight conditions like fuel load, altitude, and air speed changed. They also twist lengthwise, to alleviate stresses in the wings due to wind gusts.

The program was a success, but the FlexFoil technology still must pass rigorous FAA tests and be retrofitted onto existing aircraft or designed into new ones. Without mentioning names, Kota says he has received queries from aircraft OEMs and Tier-1 suppliers.

Kota says any object that moves through
a fluid can benefit from compliant design. “By morphing things, you can accommodate
different operating conditions. Birds do it all the time,” he says.

Assuming there’s sufficient demand, Kota says his company might manufacture FlexFoil systems. “I would love to do it here,” says Kota, who has served as assistant director for advanced manufacturing in the White House Office of Science and Technology Policy. “The people working in our company did the hard-core engineering and simulations, but they also know how to build real things. That’s the kind of talent we have in this part of the country.” db