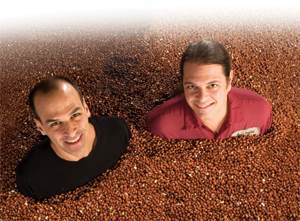 Theirs is a place where sugar comes in 100-pound sacks, peanuts and almonds arrive by the metric ton, and like the ice cream at Baskin-Robbins, nuts come in more than 31 flavors. Nuts, in a nutshell, are good. So good, that brothers Danny and Jonny Levy recently decided to change the name of their multimillion-dollar nut-manufacturing business in Warren to just that.

The name isn’t the only thing that’s changed. Over the last year, Nuts Are Good Inc. (formerly Fresh Roasted Almond Co.), has revamped its business plan to bank on more casual fare —  peanuts — as a new cash cow.

The decision was made two years ago, when the product they were most proud of — flavored almonds — was clearly working against their profit margin. In two years, “almonds [went] from under a dollar to $4.50 a pound before we said, ‘We need to do something,’” recalls Danny Levy. That something was peanuts.

In 2007, the Levys’ revenue was around $2.5 million, almost double their total sales in 2006. Their business has been growing steadily over the years, and has seen immense growth from their first year, when their business racked up a modest $38,500.

In 2008, they expect nut sales to nearly double again, to $4 million, in large part because of the success of their unique buffalo-flavored peanut. The duo also expanded their factory to include a packaging business, which is growing so rapidly, it’s looking to match nuts as a profit center.

The products, which include piña-colada-flavored peanuts, dried fruit, and certified organic granola, are now available in more than 15 states. Their customers include Meijer and many local grocery stores, and Danny says that local pubs will be on board shortly.

The Levy brothers envision their business expanding years from now, perhaps even across continents. “I’ve heard amazing things about products from West Africa,” Danny says. But for now, he and Jonny are sticking to Warren, though Danny admits with a smile, “Who knows where the fruit and nut business will take you.”