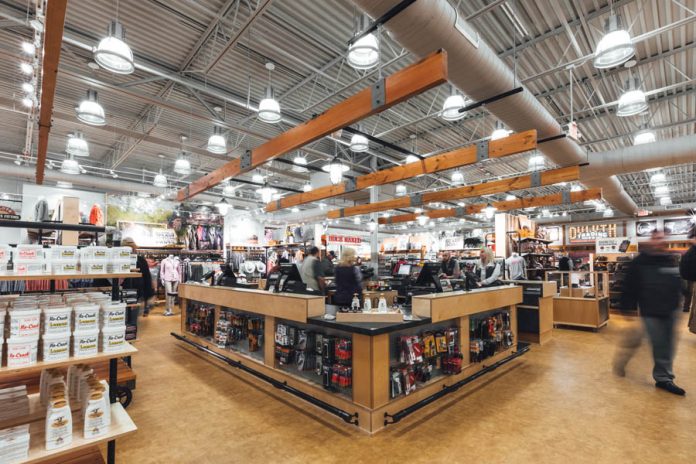 Duluth Trading Co., known for its “tougher-than-denim” fire hose jeans and idiosyncratic TV and radio ads, brought its styles of rugged work apparel to a new store in Macomb Township that opened in April — its first in Michigan.

According to district manager Mead Bradley, the decision to come to Michigan, and metro Detroit in particular, wasn’t a difficult one. “We’re definitely a Midwest brand,” Bradley says, “being focused primarily on work wear and feeling that our values as a brand pretty much line up with the values of Detroit, (which is) such a hard-working city. Detroit is just a good place for us to set up shop.”

Duluth Trading Co. got its start in 1989 as a maker of tool organizers, called Portable Products, in Belleville, Wis. The business’s founders, brothers Bob and Dave Fierek, decided to expand their product line in 1993. At the time, they changed the name to Duluth Trading — although the company didn’t open a retail location in Duluth until 2014. Eventually the business changed hands and started focusing exclusively on work wear, including the introduction of a women’s line in 2005.

Today, Duluth Trading Co. has 15 retail stores, mostly in the Midwest, and plans to open four more over the coming year. Mead says the company wants to open more stores in Michigan, and they’re currently doing research in the Wixom area.

While Duluth Trading Co. offers an array of items, Bradley says that besides the fire hose jeans, there are two other products that stick out as flagship products.

The first is the Longtail T-shirt, a work shirt designed with three extra inches of body length — the longer length allows tradesmen to crouch and bend over without revealing too much. “It’s a solution-based product, which is extremely popular,” Bradley says.

The other is Buck Naked Underwear, a style of self-cooling underwear that Bradley claims are the highest-rated underwear on the internet. “We’ve got over 16,000 five-star reviews on (this) underwear,” he says. “People laugh when we say they’re life-changing, but they really are.”

As for competition with Carhartt, which got its start in Detroit in 1889 and today is one of the strongest players in the rugged apparel market, Bradley says Duluth’s only strategy is to keep doing what it’s been doing for years.

“We’re obviously aware of the landscape,” he says, “but our whole philosophy is about the integrity of our brand, the quality of our products, and the level of service you see in our stores. We do what we do, and we do it well. We’re about delivering our customers 100 percent satisfaction, and that’s all that matters.”